Down to Earth with the Daleks 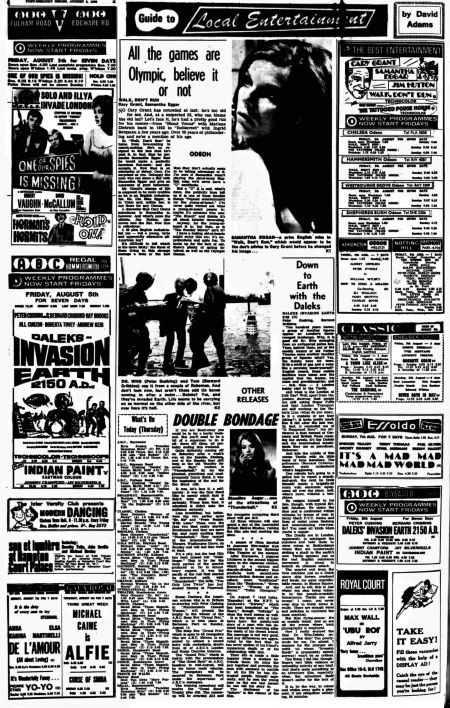 Two hundred years hence, a group of familiar figures appear on London's bomb-ravaged landscape. Why, it is good old Dr. Who emerging from an antiquated police box. Then, behind them, out of the muddy waters of old Father Thames come another familiar group of figures: what? the Daleks have hit town. With a whiff of gas and a voice like a scratchy English record, these dustbins have taken over the capital that the Doctor, his niece and granddaughter, and - this time - a London bobby visit in the Tardis.

And what is the London or 2150 like? Well, apart from the waters showing people are still eating Sugar Puffs and that London Transport are working on the Victoria Line (what do you mean, is it a mistake or are they joking?), it looks pretty much like it did after the war. In fact, it reminded me of "It Happened Here": the difference is that instead of Germans and British Nazis roaming the streets, it's the Daleks and the inhabitants they use as patrolmen, Robomen.

And into the middle of this comes with Tardis with its little band of time travellers. The policeman (Bernard Cribbins) doesn't quite understand what's happening.

One minute he going to a police box to report a smash-and-grab, the next he finds himself inside a brightly-lit room with electronic equipment all over the place. And what's more, without a telephone.

He resigns himself to his fate, though, with typical British fatalism. He opens the door and is confronted by troops of men in kinky black P.V.C. tunics and lines of metal comes flashing and exterminating everyone. So? You meet all kinds when you're a copper.

The Daleks are in London, apparently, to subjugate the populace and take them to some mine in Bedfordshire where they are mysteriously sinking a shaft to the earth's core. Tardis appears just as the last English resistance movement is about to launch its ultimate attack.

The quartet exit from the machine as a Dalek space ship hovers overhead and lands, for unpredictable reason, in Sloane Square.

And, sad to tell, this is where you being taken-in by the pseudoscientific hocus-pocus. Tardis one can accept: I mean you never even stop to think about it, really. There are enough wires and switches to confound the most skeptical.

But that flying-saucer: an crudely faked. And so are all the scenes where trick photography is employed.

Now I really enjoyed the first Dr. Who-Daleks encounter. But this? Too poorly-made for me, I'm afraid. I suppose the young element (at whom "Invasion Earth" is presumably aimed anyway) won't be so critical.

One thing I did like, though: there's very little violence or unhealthy activity of any kind. And that's quite something in an adventure film, especially when the adventure itself doesn't suffer for the lack of it.

It is, by the way, in colour whiles away quite a pleasant, if not altogether satisfying, 84 minutes.

Caption: DR. WHO (Peter Cushing) and Tom (Bernard Cribbins) cop it from a couple of Robomen. And don't look now, but aren't those odd tin boxes coming in after a swim ... Daleks? Yes, and they've invaded Earth. Life seems to be carrying on as normal on the other side of the river, but over here it's hell.