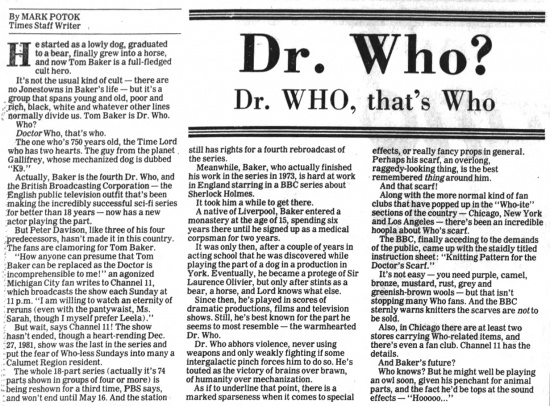 He started as a lowly dog, graduated to a bear, finally grew into a horse, and now Tom Baker is a full-fledged cult hero.

It's not the usual kind of cult — there are no Jonestowns in Baker's life — but it's a group that spans young and old, poor and rich, black, white and whatever other lines normally divide us. Tom Baker is Dr. Who.

The one who's 750 years old, the Time Lord who has two hearts. The guy from the planet Gallifrey, whose mechanized dog is dubbed "K9."

Actually, Baker is the fourth Dr. Who, and the British Broadcasting Corporation — the English public television outfit that's been making the incredibly successful sci-fi series for better than 18 years — now has a new actor playing the part.

But Peter Davison, like three of his four predecessors, hasn't made it in this country. The fans are clamoring for Tom Baker.

"How anyone can presume that Tom Baker can be replaced as the Doctor is incomprehensible tome!" an agonized Michigan City fan writes to Channel 11, which broadcasts the show each Sunday at ii p.m. "I am willing to watch an eternity of reruns (even with the pantywaist, Ms. Sarah, though I myself prefer Leela)."

But wait, says Channel 11! The show hasn't ended, though a heart-rending Dec. 27, 1981, show was the last in the series and put the fear of Who-less Sundays into many a Calumet Region resident.

The whole 18-part series (actually it's 74 parts shown in groups of four or more) is being reshown for a third time, PBS says, and won't end until May 16. And the station still has rights for a fourth rebroadcast of the series.

Meanwhile, Baker, who actually finished his work in the series in 1973, is hard at work in England starring in a BBC series about Sherlock Holmes.

It took him a while to get there.

A native of Liverpool, Baker entered a monastery at the age of 15, spending six years there until he signed up as a medical corpsman for two years.

It was only then, after a couple of years in acting school that he was discovered while playing the part of a dog in a production in York. Eventually, he became a protege of Sir Laurence Olivier, but only after stints as a bear, a horse, and Lord knows what else.

Since then, he's played in scores of dramatic productions, films and television shows. Still, he's best known for the part he seems to most resemble — the warmhearted Dr. Who.

Dr. Who abhors violence, never using weapons and only weakly fighting if some intergalactic pinch forces him to do so. He's touted as the victory of brains over brawn, of humanity over mechanization.

As if to underline that point, there is a marked sparseness when it comes to special effects, or really fancy props in general. Perhaps his scarf, an overlong, raggedy-looking thing, is the best remembered thing around him.

Along with the more normal kind of fan clubs that have popped up in the "Who-ite" sections of the country — Chicago, New York and Los Angeles — there's been an incredible hoopla about Who's scarf.

The BBC, finally acceding to the demands of the public, came up with the staidly titled instruction sheet: "Knitting Pattern for the Doctor's Scarf."

It's not easy — you need purple, camel, bronze, mustard, rust, grey and greenish-brown wools — but that isn't stopping many Who fans. And the BBC sternly warns knitters the scarves are not to be sold.

Also, in Chicago there are at least two stores carrying Who-related items, and there's even a fan club. Channel 11 has the details.

Who knows? But he might well be playing an owl soon, given his penchant for animal parts, and the fact he'd be tops at the sound effects — "Hooooo..."