Dr. Who heads the Heads' Who's who 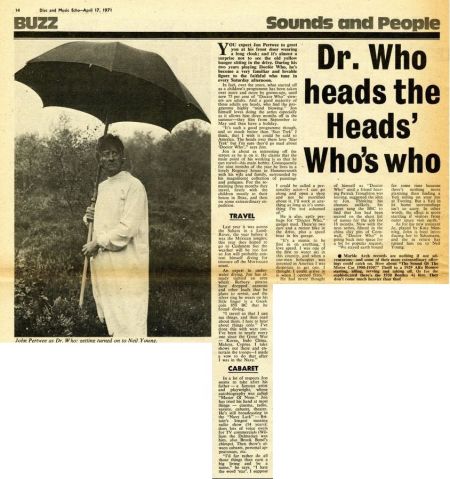 YOU expect Jon Pertwee to greet you at his front door wearing a long cloak; and it's almost a surprise not to see the old yellow banger sitting in the drive. During his two years playing Doctor Who, he's become a very familiar and lovable figure to the faithful who tune in every Saturday afternoon.

In fact, over the years, what started off as a children's programme has been taken over more and more by grown-ups, until now 75 per cent of "Doctor Who" viewers are adults. And a good majority of those adults are heads, who find the programme highly "mind blowing." Jon himself loves doing the series especially as it allows him three months off in the summer-they film from September to May and then have a holiday.

"It's such a good programme though, and so much better than 'Star Trek' I think, that I wish it could be sold to America. The heads over there love Star Trek but I'm sure they'd go mad about 'Doctor Who'." says Jon.

Jon is about as interesting off the screen as he is on it. He claims that the main point of his work is so that he can travel-his main hobby. Consequently for nine months of the year he lives in a lovely Regency house in Hammersmith with his wife and family, surrounded by his magnificent collection of paintings and antiques. For the remaining three months they travel, firstly with the children mostly to their house in Ibiza, and then on some extraordinary expedition.

Last year it was across the Sahara in a Land-Rover, the year before it was the Mexican jungles; this year they hoped to go to Cashmere but the weather will be too hot so Jon will probably content himself diving for treasure off the Moroccan coast.

An expert in underwater diving, Jon has already sighted an area where Barbary pirates have dropped cannons and other loads that he plans to revisit, and the silver ring he was on his little finger is a Greek coin 850 BC that he found diving.

"I travel so that I can see things, and then read about them. I hate to hear about things only." I've done this with wars too. I've been to nearly every one since the Great War - Korea, Indo China, Malaya, Cyprus. I take shows out there and entertain the troops - I made a vow to do that after I was in the Navy."

In a lot of respects Jom seems to take after his father a famous artist and playwright, whose "Master of None," Jon has tried his hand at most things - cinema, radio, variety, cabaret, theatre. He's still broadcasting in the "Navy Lark" - Britain's longest running radio show (14 years): does lots of voice overs for TV commercials (William, also Brook Bond's chimps). Then there's always cabaret, personal appearances, etc.

"I'd far rather do all those things than cam big living and be a name," he says. "I hate the word 'star'. I suppose could be called a personality actor-I can go along and open a shop and not be mortified - about it. I'll work at any thing as long as it's some thing I'm not ashamed of."

He is also aptly perhaps for "Doctor Who," gadget mad. There're two cars and a motor bike in the drive, plus a speed boat in his garage.

"It's a mania to be first in on anything. I love speed. I was one of the first to water ski in this country, and when a one-man helicopter was invented in America I was desperate to get one. I thought I could arrive in one when I opened fetes."

He had never thought of himself as "Doctor Who" until a friend hearing Patrick Troughton was leaving, suggested the idea to Jon. Thinking his chances unlikely his agent rang the BBC to find that Jon had been second on the short list of names for the job for 18 months. Now with the next series, filmed in the china clay pits of Cornwall, "Doctor Who" is going back into space for a bit by popular request.

"We stayed earth bound for some time because there's nothing more alarming than finding a Yeti sitting on your loo at Tooting. But a Yeti in its home surroundings isn't so scary. In other words, the effect is more startling if visitors from outer space visit earth."

As for his new assistant Jo, played by Katy Manning. John is busy introducing her to Schumann, and she in return has tumed him on to Neil Young.

Caption: John Pertwee as Dr. Who: getting turned on to Neil Young.