Dr. Who is double agent 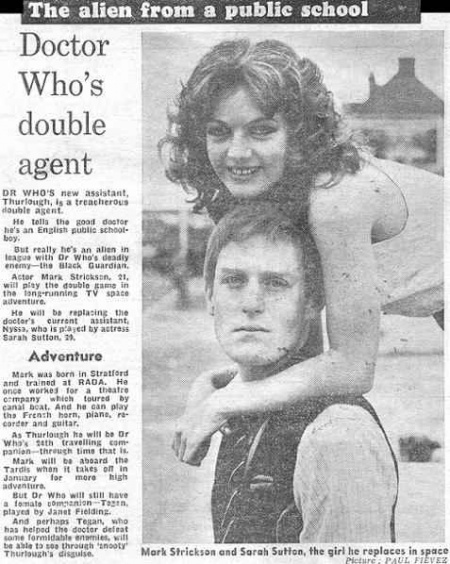 Alien from a public school

Dr. Who's new assistant Thurlough, is a treacherous double agent.

But really he's an alien in league with Dr. Who's deadly enemy-- the Black Guardian.

He will be replacing the doctor's current assistant, Nyssa, who is played by actress Sarah Sutton, 29.

Mark was born in Stratford and trained at rock he once worked for theater company which toured by canal boat. And he can play the French horn, piano, recorder and guitar.

As Thurlough he will be a Dr Who is 24th travelling companion-- through time that is.

Mark will be aboard of the Tardis when it takes off in January for more high adventure.

But Dr Who will still have a female companion-- Tegan, played by Janet Fielding.

Perhaps Tegan, who has helped the doctor defeat some formidable enemies, will be able to see through 'snooty' Thurlough's disguise.

Caption: Mark Strickson and Sarah Sutton, the girl he replaces in space