Dr. Who saves the day 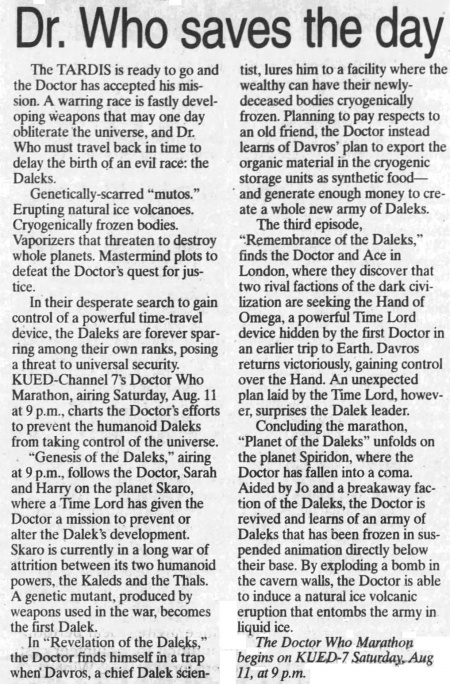 The TARDIS is ready to go and the Doctor has accepted his mission. A warring race is fastly developing Weapons that may one day obliterate the universe. and Dr. Who must travel back in time to delay the birth of an evil race: the Daleks.

In their desperate search to gain control of a powerful time-travel device, the Daleks are forever sparring among their own ranks, posing a threat to universal security. KUED-Channel 7's Doctor Who Marathon, airing Saturday, Aug. 11 at 9 p.m., charts the Doctor's efforts to prevent the humanoid Daleks from taking control of the universe.

"Genesis of the Daleks," airing at 9 p.m., follows the Doctor, Sarah and Harry on the planet Skaro, where a Time Lord has given the Doctor a mission to prevent or alter the Dalek's development. Skaro is currently in a long war of attrition between its two humanoid powers, the Kaleds and the Thals. A genetic mutant, produced by weapons used in the war, becomes the first Dalek.

In "Revelation of the Daleks," the Doctor finds himself in a trap when Davros, a chief Dalek scientist, lures him to a facility where the wealthy can have their newly-deceased bodies cryogenically frozen. Planning to pay respects to an old friend, the Doctor instead learns of Davros' plan to export the organic material in the cryogenic storage units as synthetic food—and generate enough money to create a whole new army of Daleks.

The third episode, "Remembrance of the Daleks," finds the Doctor and Ace in London, where they discover that two rival factions of the dark civilization are seeking the Hand of Omega, a powerful Time Lord device hidden by the first Doctor in an earlier trip to Earth. Davros returns victoriously, gaining control over the Hand. An unexpected plan laid by the Time Lord, however, surprises the Dalek leader.

Concluding the marathon, "Planet of the Daleks" unfolds on the planet Spiridon, where the Doctor has fallen into a coma. Aided by Jo and a breakaway faction of the Daleks, the Doctor is revived and learns of an army of Daleks that has been frozen in suspended animation directly below their base. By exploding a bomb in the cavern walls, the Doctor is able to induce a natural ice volcanic eruption that entombs the army in liquid ice.