Dr. Who special will fete 20th 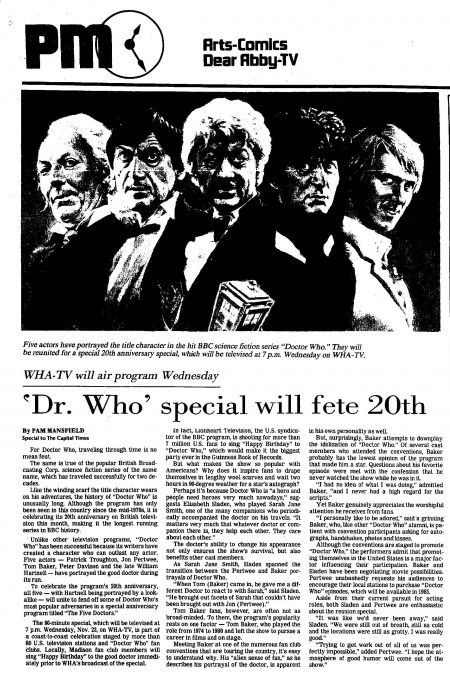 For Doctor Who, traveling through time is no mean feat.

The same is true of the popular British Broadcasting Corp. science fiction series of the same name, which has traveled successfully for two decades.

Like the winding scarf the title character wears on his adventures, the history of "Doctor Who" is unusually long. Although the program has only been seen in this country since the mid-1970s, it is celebrating its 20th anniversary on British television this month, making it the longest running series in BBC history.

Unlike other television programs, "Doctor Who" has been successful because its writers have created a character who can outlast any actor. Five actors — Patrick Troughton, Jon Pertwee, Tom Baker, Peter Davison and the late William Hartnell — have portrayed the good doctor during its run.

To celebrate the program's 20th anniversary, all five — with Hartnell being portrayed by a look-alike — will unite to fend off some of Doctor Who's most popular adversaries in a special anniversary program titled "The Five Doctors."

The 90-minute special, which will be televised at 7 p.m. Wednesday, Nov. 23, on WHA-TV, is part of a coast-to-coast celebration staged by more than 80 U.S. television stations and "Doctor Who" fan Clubs. Locally, Madison fan club members will sing "Happy Birthday" to the good doctor immediately prior to WHA's broadcast of the special.

In fact, Lionheart Television, the U.S. syndicator of the BBC program, is shooting for more than 7 million U.S. fans to sing "Happy Birthday" to "Doctor Who," which would make it the biggest party ever in the Guinness Book of Records.

But what makes the show so popular with Americans? Why does it inspire fans to drape themselves in lengthy wool scarves and wait two hours in 90-degree weather for a star's autograph?

Perhaps it's because Doctor Who is "a hero and people need heroes very much nowadays," suggests Elisabeth Sladen, who played Sarah Jane Smith, one of the many companions who periodically accompanied the doctor on his travels. "It matters very much that whatever doctor or companion there is, they help each other. They care about each other."

The doctor's ability to change his appearance not only ensures the show's survival, but also benefits other cast members.

As Sarah Jane Smith, Sladen spanned the transition between the Pertwee and Baker portrayals of Doctor Who.

"When Tom (Baker) came in, he gave me a different Doctor to react to with Sarah," said Sladen. "He brought out facets of Sarah that couldn't have been brought out with Jon (Pertwee)."

Tom Baker fans, however, are often not as broad-minded. To them, the program's popularity rests on one factor — Tom Baker, who played the role from 1974 to 1980 and left the show to pursue a career in films and on stage.

Meeting Baker at one of the numerous fan club conventions that are touring the country, it's easy to understand why. His "alien sense of fun," as he describes his portrayal of the doctor, is apparent in his own personality as well.

But, surprisingly, Baker attempts to downplay the idolization of "Doctor Who." Of several cast members who attended the conventions, Baker probably has the lowest opinion of the program that made him a star. Questions about his favorite episode were met with the confession that he never watched the show while he was in it.

"I had no idea of what I was doing," admitted Baker, "and I never had a high regard for the scripts."

Yet Baker genuinely appreciates the worshipful attention he receives from fans.

"I personally like to be adored," said a grinning Baker, who, like other "Doctor Who" alumni, is patient with convention participants asking for autographs, handshakes, photos and kisses.

Although the conventions are staged to promote "Doctor Who," the performers admit that promoting themselves in the United States is a major factor influencing their participation. Baker and Sladen have been negotiating movie possibilities. Pertwee unabashedly requests his audiences to encourage their local stations to purchase "Doctor Who" episodes, which will be available in 1985.

Aside from their current pursuit for acting roles, both Sladen and Pertwee are enthusiastic about the reunion special.

"It was like we'd never been away," said Sladen. "We were still out of breath, still as cold and the locations were still as grotty. I was really good,"

"Trying to get work out of all of us was perfectly impossible," added Pertwee. "I hope the atmosphere of good humor will come out of the show."

Caption: Five actors have portrayed the title character in the hit BBC science fiction series "Doctor Who." They will be reunited for a special 20th anniversary special, which will be televised at 7 p.m. Wednesday on WHA-TV.