Dr. Who strikes a good balance 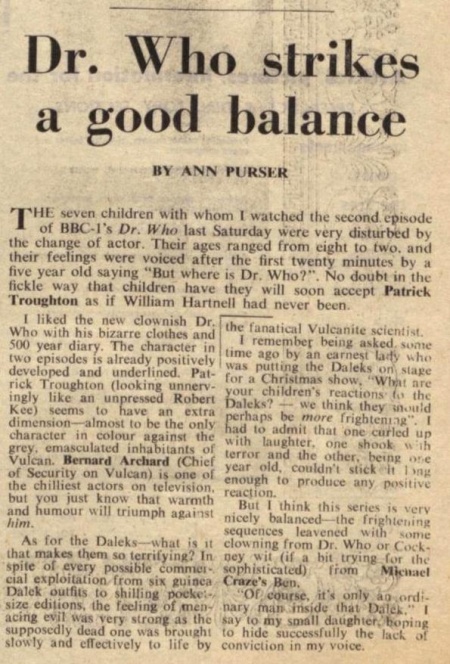 THE seven children with whom I watched the second episode of BBC-1's Dr. Who last Saturday were very disturbed by the change of actor. Their ages ranged from eight to two. and their feelings were voiced after the first twenty minutes by a five year old saying "But where is Dr. Who?". No doubt in the fickle way that children have they will soon accept Patrick Troughton as if William Hartnell had never been.

I liked the new clownish Dr. Who with his bizarre clothes and 500 year diary. The character in two episodes is already positively developed and underlined. Patrick Troughton (looking unnervingly like an unpressed Robert Kee) seems to have an extra dimension—almost to he the only character in colour against the grey, emasculated inhabitants of Vulcan. Bernard Archard (Chief of Security on Vulcan) is one of the chilliest actors on television, but you just know that warmth and humour will triumph against him.

As for the Daleks--what is it that makes them so terrifying? In spite of every possible commercial exploitation from six guinea Dalek outfits to shilling pocket-size editions, the feeling of menacing evil was very strong as the supposedly dead one was brought slowly and effectively to life by the fanatical Vulcanite scientist.

I remember being asked some time ago by an earnest lady who was putting the Daleks on stage for a Christmas show. 'What are your children's reactions to the Daleks? –- we think they should perhaps be more frightening". I had to admit that one curled up with laughter, one shook with terror and the other, being one year old, couldn't stick it long enough to produce any positive reaction.

But I think this series is very nicely balanced---the frightening sequences leavened with some clowning from Dr. Who or Cockney wit (if a hit trying for the sophisticated) from Michael Craze's Ben.

"Of course, it's only an ordinary man inside that Dalek," I'd say to my small daughter hoping to hide successfully the lack of conviction in my voice.