Dr. Who turns up on dance floor 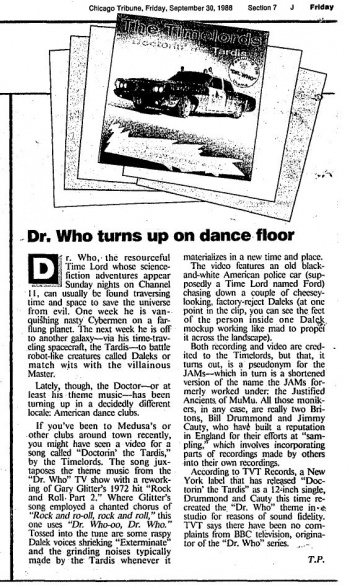 Dr. Who, the resourceful Time Lord whose science-fiction adventures appear Sunday nights on Channel 11, can usually be found traversing time and space to save the universe from evil. One week he is vanquishing nasty Cybermen on a far-flung planet. The next week he is off to another galaxy—via his time-traveling spacecraft, the Tardis—to battle robot-like creatures called Daleks or match wits with the villainous Master.

Lately, though, the Doctor—or at least his theme music—has been turning up in a decidedly different locale: American dance clubs.

If you've been to Medusa's or other clubs around town recently, you might have seen a video for a song called "Doctorin' the Tardis," by the Timelords. The song juxtaposes the theme music from the "Dr. Who" TV show with a reworking of Gary Glitter's 1972 hit "Rock and Roll. Part 2." Where Glitter's song employed a chanted chorus of "Rock and ro-oll, rock and roll," this one uses "Dr. Who-oo, Dr. Who." Tossed into the time are some raspy Dalek voices shrieking "Exterminate" and the grinding noises typically made by the. Tardis whenever it materializes in a new time and place. The video features an old black-and-white American police car (supposedly a Time Lord named Ford) chasing down a couple of cheesey-looking, factory-reject Daleks (at one point in the clip, you can see the feet of the person inside one Dalek mockup working like mad to propel it across the landscape).

Both recording and video are credited to the Timelords, but that, it turns out, is a pseudonym for the JAMs—which in turn is a shortened version of the name the JAMs formerly worked under: the Justified Ancients of MuMu. All those monikers, in any case, are really two Britons, Bill Drummond and Jimmy Cauty, who have built a reputation in England for their efforts at "sampling," which involves incorporating parts of recordings made by others into their own recordings.

According to TVT Records, a New York label that has released "Doctorin' the Tardis" as a 12-inch single, Drummond and Cauty this time recreated the, "Dr. Who" theme in the studio for reasons of sound fidelity. TVT says there have been no complaints from BBC television, originator of the "Dr. Who" series.