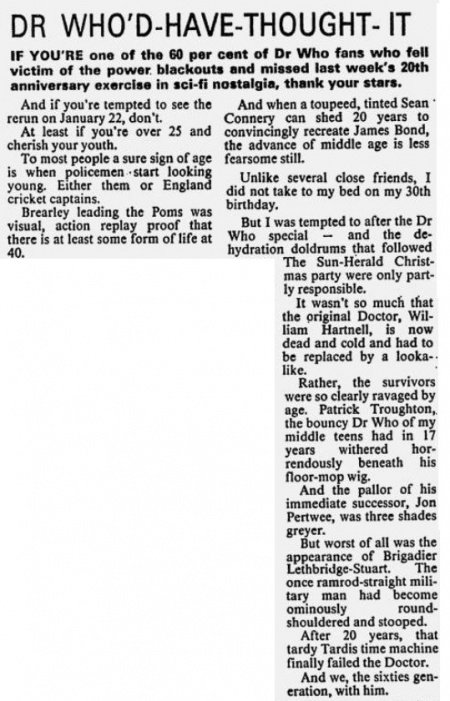 IF YOU'RE ono of the 60 per cent of Dr Who fans who fell victim of the power blackouts and missed last week's 20th anniversary exercise in sci-fi nostalgia, thank your stars.

And if you're tempted to see the rerun on January 22, don't.

At least if you're over 25 and cherish your youth.

To most people a sure sign of age is when policemen start looking young. Either them or England cricket captains.

Brearley leading the Poms was visual, action replay proof that there is at least some form of life at 40.

And when a toupeed, tinted Sean Connery can shed 20 years to convincingly recreate James Bond, the advance of middle age is less fearsome still.

Unlike several close friends, I did not take to my bed on my 30th birthday.

But I was tempted to after the Dr Who special — and the dehydration doldrums that followed The Sun-Herald Christmas party were only partly responsible.

It wasn't so much that the original Doctor, William Hartnell, is now dead and cold and had to be replaced by a lookalike.

Rather, the survivors were so clearly ravaged by age. Patrick Troughton, the bouncy Dr Who of my middle teens had in 17 years withered horrendously beneath his floor-mop wig.

And the pallor of his immediate successor, Jon Pertwee, was three shades greyer.

But worst of all was the appearance of Brigadier Lethbridge-Stuart. The once ramrod-straight military man had become ominously round-shouldered and stooped.

And we, the sixties generation, with him.