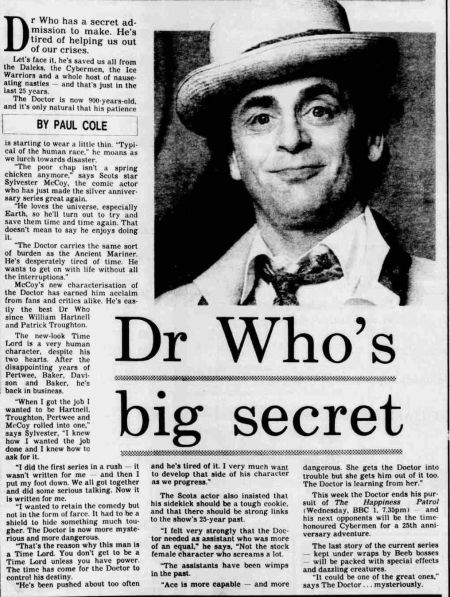 Dr Who has a secret admission to make. He's tired of helping us out of our crises. Let's face it, he's saved us all from the Daleks, the Cybermen, the lee Warriors and a whole host of pause' aging noshes — and that's just in the last 25 years.

The Doctor is now 900-years-old, and It's only natural that his patience is starling to wear a little thin. "Typical of the human race. he moans as we lurch towards disaster.

"'He loves the universe, especially Earth, so he'll turn out to try and save them time and time again. That doesn't mean to say he enjoys doing it.

"The Doctor carries the same sort of burden as the Ancient Mariner. He's desperately tired of time. He wants to get on with life without all the interruptions."

McCoy's new characterisation of the Doctor has earned him acclaim from fans and critics alike. He's easily the best Dr Who since William Hartnell and Patrick Troughton.

The new-look Time Lord is a very human character, despite his two hearts. After the disappointing years of Pertwee, Baker, Davison and Baker, he's back in business.

"When I got the job I wanted to be Hartnell, Troughton, Pertwee and McCoy rolled into one,' says Sylvester, "I knew how I wanted the job done and I knew how to ask for it.

"I did the first series in a rush — it wasn't written for me and then put my foot down. We all got together and did some serious talking. Now it le written for me.

"I wanted to retain the comedy but not in the form of farce. It had to be a shield to hide something much ton-ghee. The Doctor is now more mysterious and more dangerous.

"That's the reason why this man Is a Time Lord. You don't got to be a Time Lord unless you have power. The time has come for the Doctor to control his destiny.

"He's been pushed about too often and he's tired of It. I very much want to develop that side of his Character as we progress."

The Scots actor also insisted that his sidekick should be a tough cookie, and that there should be strong links to the show's 25-year past.

"I felt very strongly that the Doctor needed as assistant who was more of an equal." he says, 'Not the stock female character who screams a lot.

"The assistants have been wimps in the past.

"Ace is more capable — and more dangerous. She gets the Doctor into trouble but she gets him out of it too. The Doctor is learning from her."

This week the Doctor ends his pursuit of The Happiness Patrol (Wednesday, BBC 1. 7.35pm) - and his next opponents will be the time honoured Cybermen for a 25th anniversary adventure.

The last story of the current series -- kept under wraps by Beeb bosses -- will be packed with special effects and dazzling creatures.

"It could be one of the great ones," says The Doctor mysteriously.