Dr Who: Back to the future 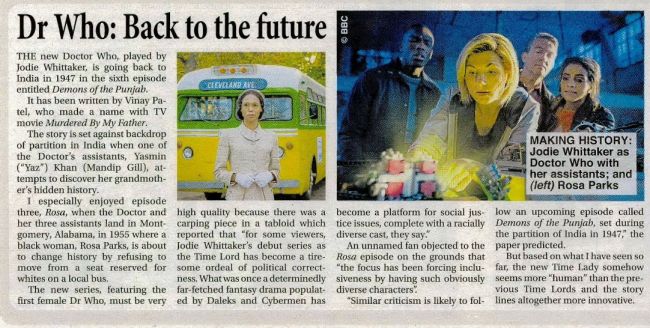 THE new Doctor Who, played by Jodie Whittaker, is going back to India in 1947 in the sixth episode entitled Demons of the Punjab.

It has been written by Vinay Patel, who made a name with TV movie Murdered By My Father.

The story is set against backdrop of partition in India when one of the Doctor's assistants, Yasmin ("Yaz") Khan (Mandip Gill), attempts to discover her grandmother's hidden history.

I especially enjoyed episode three, Rosa, when the Doctor and her three assistants land in Montgomery, Alabama, in 1955 where a black woman, Rosa Parks, is about to change history by refusing to move from a seat reserved for whites on a local bus.

The new series, featuring the first female Dr Who, must be very

high quality because there was a carping piece in a tabloid which reported that "for some viewers, Jodie Whittaker's debut series as the Time Lord has become a tiresome ordeal of political correctness. What was once a determinedly far-fetched fantasy drama populated by Daleks and Cybermen has become a platform for social justice issues, complete with a racially diverse cast, they say."

An unnamed fan objected to the Rosa episode on the grounds that "the focus has been forcing inclusiveness by having such obviously diverse characters':

"Similar criticism is likely to follow an upcoming episode called Demons of the Punjab, set during the partition of India in 1947," the paper predicted.

But based on what I have seen so far, the new Time Lady somehow seems more "human" than the previous Time Lords and the story lines altogether more innovative.

Caption: MAKING HISTORY: Jodie Whittaker as Doctor Who with her assistants; and (left) Rosa Parks