Dr Who: From stone age to charm 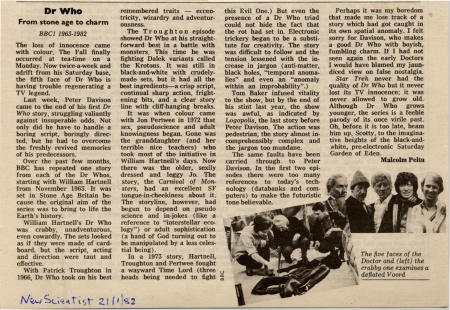 The loss of innocence came with colour. The Fall finally occurred at tea-time on a Monday. Now twice-a-week and adrift from his Saturday base, the fifth face of Dr Who is having trouble regenerating a TV legend.

Last week, Peter Davison came to the end of his first Dr Who story, struggling valiantly against insuperable odds. Not only did he have to handle a boring script, boringly directed, but he had to overcome the freshly revived memories of his predecessors.

Over the past few months, BBC has repeated one story from each of the Dr Whos, starting with William Hartnell from November 1963. It was set in Stone Age Britain because the original aim of the series was to bring to life the Earth's history.

William Hartnell's Dr Who was crabby, unadventurous, even cowardly. The sets looked as if they were made of cardboard, but the script, acting and direction were taut and effective.

With Patrick Troughton in 1966, Dr Who took on his best remembered traits — eccentricity, wizardry and adventurousness.

The Troughton episode showed Dr Who at his straightforward best in a battle with monsters. This time he was fighting Dalek variants called the Krotons. It was still in black-and-white with crudely-made sets, but it had all the best ingredients—a crisp script, continual sharp action, frightening bits, and a clear story line with cliff-hanging breaks.

It was when colour came with Jon Pertwee in 1972 that sex, pseudoscience and adult knowingness began. Gone was the granddaughter (and her terrible nice teachers) who took most of the initiative in William Hartnell's days. Now there was the older, sexily dressed and leggy Jo. The story, the Carnival of Monsters, had an excellent SF tongue-in-cheekiness about it. The storyline, however, had begun to depend on pseudo science and in-jokes (like a reference to "interstellar ecology") or adult sophistication (a hand of God turning out to be manipulated by a less celestial being) .

In a 1973 story, Hartnell, Troughton and Pertwee fought a wayward Time Lord (three heads being needed to fight this Evil One.) But even the presence of a Dr Who triad could not hide the fact that the rot had set in. Electronic trickery began to be a substitute for creativity. The story was difficult to follow and the tension lessened with the increase in jargon (anti-matter, black holes, "temporal anomalies" and even an "anomaly within an improbability".)

Tom Baker infused vitality to the show, but by the end of his stint last year, the show was awful, as indicated by Logopolis, the last story before Peter Davison. The action was pedestrian, the story almost incomprehensibly complex and the jargon too mundane.

The same faults have been carried through to Peter Davison. In the first two episodes there were too many references to today's technology (databanks and computers) to make the futuristic tone believable.

Perhaps it was my boredom that made me lose track of a story which had got caught in its own spatial anomaly. I felt sorry for Davison, who makes a good Dr Who with boyish, fumbling charm. If I had not seen again the early Doctors I would have blamed my jaundiced view on false nostalgia.

Star Trek never had the quality of Dr Who but it never lost its TV innocence; it was never allowed to grow old. Although Dr Who grows younger, the series is a feeble parody of its once virile past. Oh, before it is too late, beam him up, Scotty, to the imaginative heights of the black-and-white, pre-electronic Saturday Garden of Eden.

Caption: The five faces of the Doctor and (left) the crabby one examines a deflated Voord