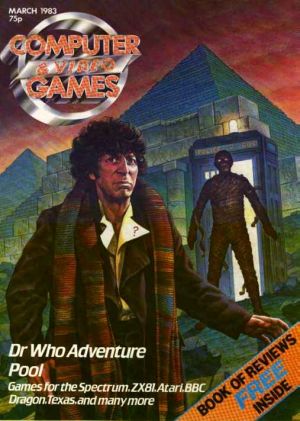 Another time, another place ... the Doctor is on the move again and this time you can become one of his travelling companions.

This graphics adventure is based on the classic sci-fi TV series Or Who. In it the good Doctor is trapped on the planet Sirardos IV in a pyramid built by his arch-enemy, the Master.

The Master plans to destroy the planet - and the Doctor - with a time bomb. He has stolen the Doctor's time drive unit from the Tardis — and without this the Doctor cannot escape the doomed planet. He must get it back — but he can only do this by killing the Master.

You take the role of the Doctor — everything else is controlled by the computer. There are 12 rooms within the pyramid which you must explore in your attempt to escape.

Some of the rooms contain things you will need to escape — some contain hazards which you must overcome.

Objects you need are hidden in mummy cases — but be careful, some of the cases contain angry mummies who do not want to be disturbed! The position of mummies and mummy cases differs each time you play the game.

You can drop an object you are carrying in an empty room by pressing the lire button on the joystick which you also use to control your movements These objects are replaced in mummy cases when you leave the room.

The time left before the bomb explodes and the number of the roomy you are in are shown at the bottom of the screen.

Objects you will need in your escape bid are the key to the Master's Tardis, which is contained in a mummy case somewhere in the pyramid, a sword from the High Priest's temple which will protect you against snakes and the Sphinx: a magic ring, which protects you against any stray thunderbolts, a rope, which will come in useful it you tall into any pits, a ray gun, which you will find in a pit, and your time drive which is in the Master's Tardis.

Deadly dangers which you must avoid or defeat if you are to survive include mummies and snakes. And don't leave the key in the Master's Tardis - you'll never get back in!

Because this program includes instructions which are shown while the other program is loading saving procedures are slightly different from normal. To load the program type. RUN "C." (and press RETURN)

TO save the instruction program either load it oft the tape by typing "CLOAD" instead of "RUN"C."" and when it is ready type "SAVE"C:", or write out the listing and type 'SAVE "C.".

When the instructions have been saved (using SAVE -C:") you can save the main program. You do this by either writing out the listing of loading the program from tape and then, DIRECTLY alter the instruction program, you CSAVE the program in the normal way.

There are two main advantages of having the two different programs. The first is that the instructions can be read in plenty of time while you are waiting for the main program to load.

The second is that this method saves about 8 K of memory and a lot of time. This is because it creates a whole new custom character set before printing the instructions. The new set is kept in memory will you load the new program (even NEW does not affect it).

However, there is a problem with the program, and this is that after 15-50 games (depending on their length) the character generation Marts to get over written by RAM.

This seems impossible to solve. There may be a way bit I do not know one perhaps someone out there can solve it?

The character set RAM is held as high up in memory as I can get at without upsetting the Display List. The only thing to do when this happens is to re-load the whole program.