Dr Who and Spock have 'em hooked 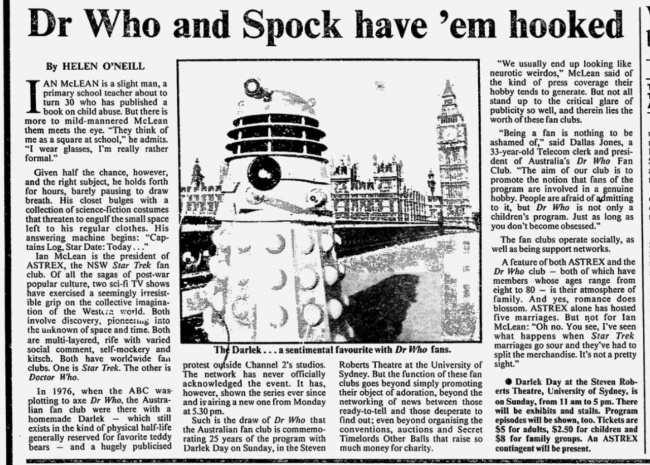 IAN McLEAN is a slight man, a primary school teacher about to turn 30 who has published a book on child abuse. But there is more to mild-mannered McLean them meets the eye. "They think of me as a square at school," he admits. "I wear glasses, I'm really rather formal."

Given half the chance, however, and the right subject, he holds forth for hours, barely pausing to draw breath. His closet bulges with a collection of science-fiction costumes that threaten to engulf the small space left to his regular clothes. His answering machine begins: "Captains Log, Star Date: Today ..."

Ian McLean is the president of ASTREX, the NSW Star Trek fan club. Of all the sagas of post-war popular culture, two sci-fi TV shows have exercised a seemingly irresistible grip on the collective imagination of the Western world. Both involve discovery, pioneering into the unknown of space and time. Both are multi-layered, rife with varied social comment, self-mockery and kitsch. Both have worldwide fan clubs. One is Star Trek. The other is Doctor Who.

in 1976, when the ABC was plotting to axe Dr Who, the Australian fan club were there with a homemade Darlek — which still exists in the kind of physical half-life generally reserved for favorite teddy bears — and a hugely publicized protest outside Channel 2's studios. The network has never officially acknowledged the event. It has, however, shown the series ever since and is airing a new one from Monday at 5.30 pm.

Such is the draw of Dr Who that the Australian fan club is commemorating 25 years of the program with Darlek Day on Sunday, in the Steven Roberts Theatre at the University of Sydney. But the function of these fan clubs goes beyond simply promoting their object of adoration, beyond the networking of news between those ready-to-tell and those desperate to find out; even beyond organising the conventions, auctions and Secret Timelords Other Balls that raise so much money for charity.

"We usually end up looking like neurotic weirdos," McLean said of the kind of press coverage their hobby tends to generate. But not all stand up to the critical glare of publicity so well, and therein lies the worth of these fan clubs.

"Being a fan is nothing to be ashamed of," said Dallas Jones, a 33-year-old Telecom clerk and president of Australia's Dr Who Fan Club. "The aim of our club is to promote the notion that fans of the program are involved in a genuine hobby. People are afraid of admitting to it, but Dr Who is not only a children's program. Just as long as you don't become obsessed."

The fan clubs operate socially, as well as being support networks.

A feature of both ASTREX and the Dr Who club — both of which have members whose ages range from eight to 80 — is their atmosphere of family. And yes, romance does blossom. ASTREX alone has hosted five marriages. But not for Ian McLean: "Oh no. You see, I've seen what happens when Star Trek marriages go sour and they've had to split the merchandise. It's not a pretty sight."

Darlek Day at the Steven Roberts Theatre, University of Sydney, is on Sunday, from 11 am to 5 pm. There will be exhibits and stalls. Program episodes will be shown, too. Tickets are $5 for adults, $2.50 for children and $8 for family groups. An ASTREX contingent will be present.

Caption: The Darlek ... a sentimental favourite with Dr Who fans.