Dr Who disc puts BBC into a spin 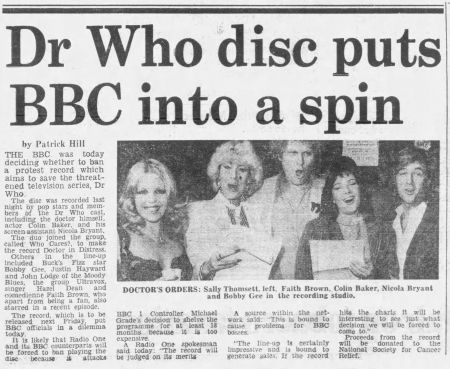 THE BBC was today deciding whether to ban a protest record which aims to save the threatened television series, Dr Who,

The disc was recorded last night by pop stars and members of the Dr Who cast, including the doctor himself, actor Colin Baker, and his screen assistant Nicola Bryant,

The duo joined the group, called Who Cares?, to make the record Doctor in Distress.

Others in the line-up included Buck's Fizz star Bobby Gee, Justin Hayward and John Lodge of the Moody Blues, the group Ultravox, singer Hazel Dean and comedienne Faith Brown, who apart from being a fan, also starred in a recent episode.

The record, which is to be released next Friday. put BBC officials in a dilemma today.

It is likely that Radio One and its BBC counterparts will be forced to ban playing the disc because it attacks BBC 1 Controller Michael Grade's decision to shelve the programme for at least 13 months because it is too expensive.

A Radio One spokesman said today: "The record will be judged on its merits

A source within the network said: "This is bound to cause problems for BBC bosses.

"The line-up is certainly impressive and is bound to generate sales. If the record hits the charts it will be interesting to see just what decision we will be forced to come to."

Proceeds from the record will be donated to the National Society for Cancer Relief.