Dr Who enters another dimension 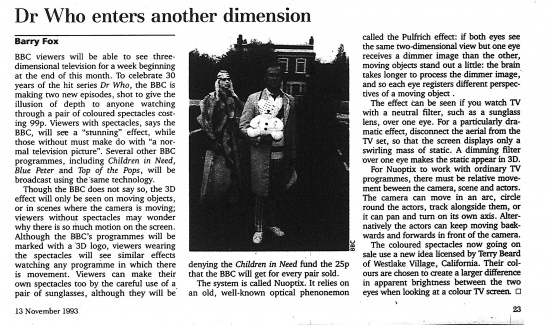 BBC viewers will be able to see three-dimensional television for a week beginning at the end of this month. To celebrate 30 years of the hit series Dr Who, the BBC is making two new episodes, shot to give the illusion of depth to anyone watching through a pair of coloured spectacles costing 99p. Viewers with spectacles, says the BBC, will see a "stunning" effect, while those without must make do with "a normal television picture". Several other BBC programmes, including Children in Need, Blue Peter and Top of the Pops, will be broadcast using the 'same technology.

Though the BBC does not say so, the 3D effect will only be seen on moving objects, or in scenes where the camera is moving; viewers without spectacles may wonder why there is so much motion on the screen. Although the BBC's programmes will be marked with a 3D logo, viewers wearing the spectacles will see similar effects watching any programme in which there is movement. Viewers can make their own spectacles too by the careful use of a pair of sunglasses, although they will be denying the Children in Need fund the 25p that the BBC will get for every pair sold. The system is called Nuoptix. It relies on an old, well-known optical phenomenon called the Pulfrich effect: if both eyes see the same two-dimensional view but one eye receives a dimmer image than the other, moving objects stand out a little: the brain takes longer to process the dimmer image, and so each eye registers different perspectives of a moving object.

The effect can be seen if you watch TV with a neutral filter, such as a sunglass lens, over one eye. For a particularly dramatic effect, disconnect the aerial from the TV set, so that the screen displays only a swirling mass of static. A dimming filter over one eye makes the static appear in 3D.

For Nuoptix to work with ordinary TV programmes, there must be relative movement beween the camera, scene and actors. The camera can move in an arc, circle round the actors, track alongside them, or it can pan and turn on its own axis. Alternatively the actors can keep moving backwards and forwards in front of the camera.

The coloured spectacles now going on sale use a new idea licensed by Terry Beard of Westlake Village, California. Their colours are chosen to create a larger difference in apparent brightness between the two eyes when looking at a colour TV screen.