Dr Who keeps cash coming in for Philip 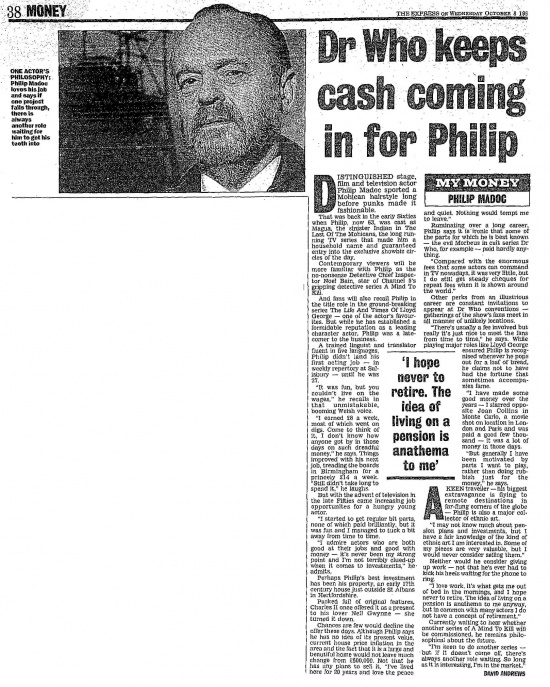 That was back in the early Sixties when Philip, now 63, was cast as Magua, the sinister Indian in The Last Of The Mohicans, the long running TV series that made him a household name and guaranteed entry into the exclusive showbiz circles of the day.

And fans will also recall Philip in the title role in the ground-breaking series The Life And Times Of Lloyd George — one of the actor's favourites. But while he has established a formidable reputation as a leading character actor, Philip was a latecomer to the business.

A trained linguist and translator fluent in five languages, Philip didn't land his first acting job — in weekly repertory at Salisbury — until he was 27.

"It was fun, but you couldn't live on the wages," he recalls in that unmistakable, booming Welsh voice.

"I earned £8 a week, most of which went on digs. Come to think of it, I don't know how anyone got by in those days on such dreadful money," he says. Things improved with his next job, treading the boards in Birmingham for a princely £14 a week.

"Still didn't take long to spend it," he laughs.

But with the advent of television in the late Fifties came increasing job opportunites for a hungry young actor.

"I started to get regular bit parts, none of which paid brilliantly, but it was fun and I managed to tuck a bit away from time to time.

"I admire actors who are both good at their jobs and good with money — it's never been my strong point and I'm not terribly clued-up when it comes to investments," he admits.

Perhaps Philip's best investment has been his property, an early 17th century house just outside St Albans in Hertfordshire.

Packed full of original features, Charles II once offered it as a present to his lover Nell Gwynne — she turned it down.

Chances are few would decline the offer these days. Although Philip says he has no idea of its present value, current house price inflation in the area and the fact that it is a large and beautiful home would not leave much change from £500,000. Not that he has any plans to sell it. "I've lived here for 20 years and love the peace and quiet. Nothing would tempt me to leave."

Ruminating over a long career, Philip says it is-ironic that some of the parts for which he is best known — the evil Morbeus in cult series Dr Who, for example — paid hardly anything.

"Compared with the enormous fees that some actors can command in TV nowadays, it was very little, but I do still get steady cheques for repeat fees when it is shown around the world."

Other perks from an illustrious career are constant invitations to appear at Dr Who conventions —gatherings of the show's fans meet in all manner of unlikely locations.

"There's usually a fee involved but really it's just nice to meet the fans from time to time," he says. While playing major roles like Lloyd George ensured Philip is recognised whenever he pops out for a loaf of bread, he claims not to have had the fortune that sometimes accompanies fame.

"I have made some good money over the years — I starred opposite Joan Collins in Monte Carlo, a movie shot on location in London and Paris and was paid a good few thousand — it was a lot of money in those days. "But generally I have been motivated by parts I want to play, rather than doing rubbish just for the money," he says.

A KEEN traveller — his biggest extravagance is flying to remote destinations in far-flung corners of the globe — Philip is also a major collector of ethnic art.

"I may not know much about pension plans and investments, but I have a fair knowledge of the kind of ethnic art I am interested in. Some of my pieces are very valuable, but I would never consider selling them."

Neither would he consider giving up work — not that he's ever had to kick his heels waiting for the phone to ring.

"I love work, it's what gets me out of bed in the mornings, and I hope never to retire. The idea of living on a pension is anathema to me anyway, but in common with many actors I do not have a concept of retirement."

Currently waiting to hear whether another series of A Mind To Kill will be commissioned, he remains philosophical about the future.

"I'm keen to do another series —but if it doesn't come off, there's always another role waiting. So long as it is interesting, I'm in the market."

Caption: ONE ACTOR'S PHILOSOPHY: Philip Madoc loves his job and says if one project falls through, there is always another role waiting for him to get his teeth into