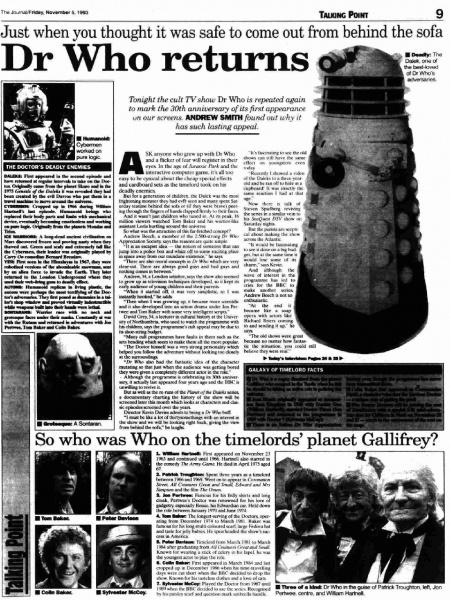 Tonight the cult TV show Dr Who is repeated again to mark the 30th anniversary of its first appearance on our screens. ANDREW SMITH found out why it has such lasting appeal.

ASK anyone who grew up with Dr Who and a flicker of fear will register in their eyes. In the age of Jurassic Park and the interactive computer game, it's all too easy to be cynical about the cheap special effects and cardboard sets as the timelord took on his deadly enemies.

But for a generation of children, the Dalek was the most frightening monster they had ever seen and many spent Saturday teatime behind the sofa or (if they were brave) peering through the fingers of hands clapped firmly to their faces

And it wasn't just children who tuned in. At its peak, 16 million viewers watched Tom Baker and his warrior-like assistant Leela hurtling around the universe.

So what was the attraction of this far-fetched concept?

Andrew Beech, a member of the 2,500-strong Dr Who Appreciation Society, says the reasons are quite simple.

"It is an escapist idea the notion of someone that can jump into a police box and whizz off to some exciting place in space away from our mundane existence," he says.

"There are also moral concepts in Dr Who which are very clear-cut. There are always good guys and bad guys and nothing comes in between."

Andrew, 34, a London solicitor, says the show also seemed to grow up as television techniques developed, so it kept its early audience of young children and their parents.

"When it started off, it was very simplistic, so I was instantly hooked," he adds

"Then when I was growing up, it became more scientific and it also developed into an action drama under Jon Pertwee and Tom Baker with some very intelligent scripts"

David Grey, 54, a lecturer in cultural history at the University of Northumbria, who used to watch the programme with his children, says the programme's cult appeal may be due to its shoe-string budget.

"Many cult programmes have faults in them such as the sets bending which seem to make them all the more popular.

"The Doctor himself was a very strong personality which helped you follow the adventure without looking too closely at the surroundings.

"Dr Who also had the fantastic idea of the character mutating so that just when the audience was getting bored they were given a completely different actor in the role."

Although the programme is celebrating its 30th anniversary, it actually last appeared four years ago and the BBC is unwilling to revive it.

But as well as the re-runs of the Planet of the Daleks series, a documentary charting the history of the show will be screened later this month which looks at characters and classic episodes screened over the years.

Director Kevin Davies admits to being a Dr Who buff

"I must be like a lot of thirtysomethings with an interest in the show and we will be looking right back, giving the view from behind the sofa," he laughs.

"It's fascinating to see the old shows can still have the same effect on youngsters even today.

"Recently I showed a video of the Daleks to a three-year-old and he ran off to hide in a cupboard! It was exactly the same reaction I had at that age."

Now there is talk of Steven Spielberg reviving the series in a similar vein to his Sea Quest DSV show on Saturday nights.

But the purists are sceptical about making the show across the Atlantic.

"It would be fascinating to see it done on a big budget, but at the same time it would lose some of its charm," says Kevin.

And although the wave of interest in the programme has led to cries for the BBC to make another series, Andrew Beech is not so enthusiastic.

"At the end it became like a soap opera with actors like Richard Briers coming in and sending it up," he says

"The old shows were great because no matter how fantastic the stituation, you could still believe they were real."

DALEKS: First appeared in the second episode and have returned at regular intervals to take on the Doctor. Originally came from the planet Skaro and in the 1975 Genesis of the Daleks it was revealed they had been created by the evil Davros who put them in a travel machine to move around the universe.

CYBERMEN: Cropped up is 1966 during William Harnell's last episode. Humanoid beings who repaired their body parts and limbs with mechanical device, eventually becoming emotionless and working on pure logic. Originally from the planets Mondas and Telos.

ICE WARRIORS: A long-dead ancient civilisation on Mars discovered frozen and proving nasty when they thawed out. Green and scaly and extremely tall like the Cybermen, the leader was originally played by Carry On comedian Bernard Bresslaw.

YETI: First seen is the Himalayas in 1967, they were robotised versions of the Abominable snowman, sent by an alien force to invade the Earth. They later returned to the London Underground where they used their web-firing guns to deadly effect.

AUTONS: Humanoid replicas in living plastic, the autons were perhaps the most terrifyhog of the Doctor's adversaries. They first posed as dummies in a tailor's shop widow and proved virtually imdestructibie while weapons built into their hands were lethal.

SONTARANS: Warrior race with no neck and grotesque faces under their masks. Constantly at war with the Rutans and returned in adventures with Jon Pertwee, Tom Baker and Colin Baker.

So who was Who on the timelord's planet Gallifrey?