Dr Who v The Master 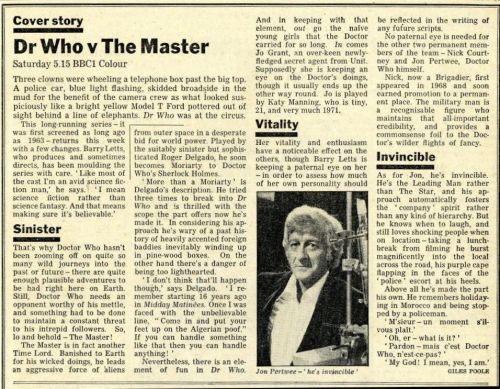 A police car, blue light flashing, skidded broadside in the mud for the benefit of the camera crew as what looked suspiciously like a bright yellow Model T Ford pottered out of sight behind a line of elephants. Dr Who was at the circus.

This long-running series - it was first screened as long ago as 1963 -returns this week with a few changes. Barry Letts, who produces and sometimes directs, has been moulding the series with care. 'Like most of the cast I'm an avid science fiction man,' he says. I mean science fiction rather than science fantasy. And that means making sure it's believable.'

That's why Doctor Who hasn't been zooming off on quite so many wild journeys into the past or future - there are quite enough plausible adventures right here on Earth. Still, Doctor Who needs an opponent worthy of his mettle, and something had to be done to maintain a constant threat to his intrepid followers. So, lo and behold - The Master!

The Master is in fact another Time Lord. Banished to Earth for his wicked doings, he leads an aggressive force of aliens from outer space in a desperate bid for world power. Played by the suitably sinister but sophisticated Roger Delgado, he soon becomes Moriarty to Doctor Who's Sherlock Holmes.

'More than a Moriarty' is Delgado's description. He tried three times to break into Dr Who and is thrilled with the scope the part offers now he's made it. In considering his approach he's wary of a past his tory of heavily accented foreign baddies inevitably winding up in pine wood boxes. On the other hand there's a danger of being too lighthearted.

'I don't think that'll happen though,' says Delgado. 'I remember starting 16 years ago in Midday Matinées. Once I was faced with the unbelievable line, "Come in and put your feet up on the Algerian poof." If you can handle something like that then you can handle anything!

Nevertheless, there is an element of fun in Dr Who. And in keeping with that young girls that the Doctor carried for so long. In comes Jo Grant, an over-keen newly-fledged secret agent from Unit. Supposedly she is keeping an Who himself. though it usually ends up the other way round. Jo is played by Katy Manning, who is tiny, 21, and very much 1971.

Her vitality and enthusiasm have a noticeable effect on the others, though Barry Letts is keeping a paternal eye on her - in order to assess how much of her own personality should be reflected in the writing of any future scripts.

No paternal eye is needed for the other two permanent members of the team - Nick Courtney and Jon Pertwee, Doctor Who himself.

element, out go the naïve

Three clowns were wheeling a telephone box past the big top.

eye on the Doctor's doings,

Nick, now a Brigadier, first appeared in 1968 and soon earned promotion to a permanent place. The military man is a recognisable figure who maintains that all-important credibility, and provides a commonsense foil to the Doctor's wilder flights of fancy.

As for Jon, he's invincible. He's the Leading Man rather than The Star, and his approach automatically fosters the company' spirit rather than any kind of hierarchy. But he knows when to laugh, and still loves shocking people when on location -taking a lunch break from filming he burst magnificently into the local across the road, his purple cape flapping in the faces of the to police' escort at his heels.

Above all he's made the part his own. He remembers holidaying in Morocco and being stopped by a policeman.