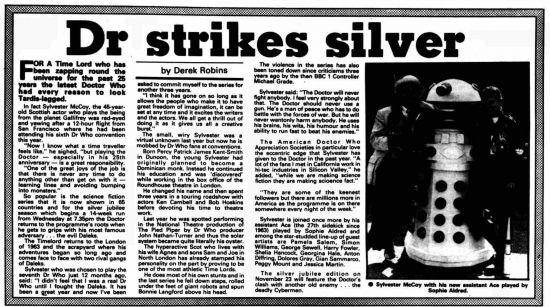 For a Time Lord who has been zapping round the universe for the past 25 years the latest Doctor Who had every reason to look Tardis-lagged.

In fact Sylvester McCoy, the 45-year-old Scottish actor who plays the being from the planet Gallifrey was red-eyed and yawing after a 12-hour flight from San Francisco where he had been attending his sixth Dr Who convention this year.

"Now I know what a time traveller feels like," he sighed, "but playing the Doctor — especially in his 25th anniversary — is a great responsibility.

"One of the greet joys of the job is that there is never any time to do anything other than get on with it —learning lines and avoiding bumping into monsters."

So popular is the science fiction series that it is now shown in 65 countries and for the silver jubilee season which begins a 14-week run from Wednesday at 7.35pm the Doctor returns to the programme's roots when he gets to grips with his most famous adversary ... the evil Daleks.

The Timelord returns to the London of 1963 and the scrapyard where his adventures began so long ago and comes face to face with two rival gangs of Daleks..

Sylvester who was chosen to play the seventh Dr Who just 12 months ago, said: "I didn't feel that I was a real Dr Who until I fought the Daleks. It has been a zeal year and now I've been asked to commit myself to the series for another three years.

"I think it has gone on so long as it allows the people who make it to have great freedom of imagination, it can be set at any time and it excites the writers and the actors. We all get a thrill out of doing it as it gives us all a creative burst"

The small, wiry Sylvester was virtual unknown last year but now he is mobbed by Dr Who fans at conventions. Born Percy Patrick James Kent-Smith in Dunoon, the young Sylvester had originally planned to become a Dominican monk. Instead he continued his education and was 'discovered' while working in the box office of the Roundhouse theatre in London.

He changed his name and then spent three years in touring roadshow with actors Ken Cornball and Bob Hoskins before devoting his time to theatre work._

Last year he was spotted performing in the National Theatre production of The Pied Piper by Dr Who producer John Nathan-Turner and thus the solar system became quite literally his oyster.

The hyperactive Scot who lives with his wife Agnes end sons Sam and Joe in North London has already stamped his personality on the part by proving to be one of the most athletic Time Lords.

He does most of his own stunts end in the last series he fell down steps. rolled under the feet of giant robots and spun Bonnie Langford above his head.

The violence in the series has also been toned down since criticisms three year ago by the then BBC 1 Controller Michael Grade.

Sylvester said: "The Doctor will never fight anybody. I feel very strongly about that. The Doctor should never use gun. He's a man of peace who has to do battle with the forces of war. But he will never wantonly harm anybody. He urn his brains, his wits, his humour and his ability to run fast to beat his enemies."

The American Doctor Who Appreciation Societies in particular love the eccentric edge that Sylvester has given to the Doctor in the past year. "A lot of the fans I met in California work in hi-tec industries in Silicon Valley," he added, "while we are making science fiction they are making science fact."

"They are some of the keenest followers but there are millions more in America as the programme is on there somewhere every night of the week."

The silver jubilee edition on November 23 will feature the Doctor's clash with another old enemy . . the deadly Cybermen.