Dyke calls up Daleks to take on Hollywood 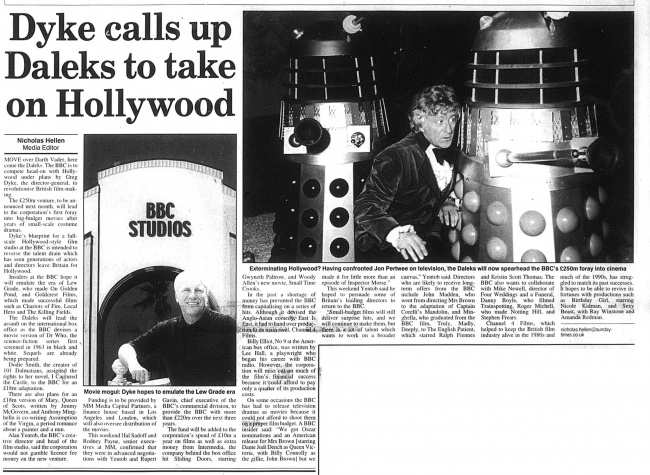 MOVE over Darth Vader, here come the Daleks. The BBC is to compete head-on with Hollywood under plans by Greg Dyke, the director-general, to revolutionise British film-making.

The £1250m venture, to be announced next month. will lead to the corporation's first foray into big-budget movies after years of small-scale costume dramas.

Dyke's blueprint for a full-scale Hollywood-style film studio at the BBC is intended to reverse the talent drain which has seen generations of actors and directors leave Britain for Hollywood.

Insiders at the BBC hope will emulate the era of Lew Grade, who made On Golden Pond, and Goldcrest Films, which made successful films such as Chariots of Fire. Local Hero and The Killing Fields. The Daleks will lead the assault on the international box office as the BBC devises a movie version of Dr Who, the science-fiction series first screened in 1963 in black and white. Sequels are already being prepared.

Dodie Smith, the creator of 101 Dalmatians, assigned the rights to her novel, I Captured the Castle. to the BBC for an £18m adaptation.

There are also plans for £18m version of Mary, Queen of Scots, written by Jimmy McGovern, and Anthony Minghella is co-writing Assumption of the Virgin, a period romance about a painter and a nun. Alan Yentob, the BBC's creative director and head of the film studio, said the corporation would not gamble licence fee money on the new venture.

Funding is to be provided by MM Media Capital Partners. a finance house based in Los Angeles and London, which will also oversee distribution of the movies.

This weekend Hal Sadoff and Rodney Payne, senior executives at MM, confirmed that they were in advanced negotiations with Yentob and Rupert Gavin, chief executive of the BBC's commercial division, to provide die BBC with more than £220m over the next three years.

The fund will be added to the corporation's spend of £10m a fear on films as well as extra money from Intermedia, the company behind the box office hit Sliding Doors, starring Gwyneth Paltrow, and Woody Allen's new movie, Small Time Crooks.

In the past a shortage of money has prevented the BBC capitalisin4 on a series of hits. Although it devised the Anglo-Asian comedy, East Is, East, it had to hand over production to it's main rival Channel 4 Films.

Billy Elliot, No 9 at the American box office, was written by Lee Hall, a playwright who began his career with BBC radio. However the corporation will miss out on much of the film's financial success because it could afford to pay only a quarter of its production costs.

On some occasions the BBC has had to release television dramas as movies because it could not afford to shoot them on a proper film budget, an insider said: "We got Oscar nominations and an American release for Mrs Brown [starring Dame Judi Dench as Queen Victoria, with Billy Connolly as the gillie, John Brown] but we made it for little more than an episode of Inspector Morse."

This weekend Yentob said he hoped to persuade some of Britain's leading directors to return to the BBC.

"Small-budget films will still deliver surprise hits, and we will continue to make them, but there is a lot of talent which wants to work on a broader canvas," Yentob said. Directors who are likely to receive long-term offers from the BBC include John Madden, who went from directing Mrs Brown to the adaptation of Captain Corelli's Mandolin, and Minghella, who graduated from the BBC film, Truly, Madly, Deeply, to The English Patient, which starred Ralph Fiennes and Kristin Scott Thomas. The BBC also wants to collaborate with Mike Newell, director of Four Weddings and a Funeral. Danny Boyle, who filmed Trainspotting, Roger Michell, who made Notting Hill, and Stephen Frears.

Channel 4 Films, which helped to keep the British film industry alive in the 1980s and much of the 1990s, has struggled to match its past successes. It hopes to revive its fortunes with productions as Birthday Girl, starring Nicole Kidman, and Sext Beast, with Ray Winstone and Amanda Redman.

Caption: Exterminating Hollywood? Having confronted Jon Pertwee on television, the Daleks will now spearhead the BBC's £250m foray into cinema