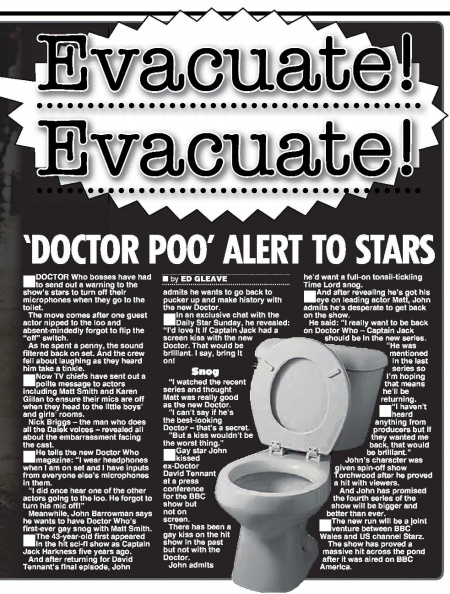 DOCTOR Who bosses have had to send out a warning to the show's stars to turn off their microphones when they go to the toilet.

The move comes after one guest actor nipped to the loo and absent-mindedly forgot to flip the "off" switch.

As he spent a penny, the sound filtered back on set. And the crew fell about laughing as they heard him take a tinkle.

Now TV chiefs have sent out a polite message to actors including Matt Smith and Karen Gillen to ensure their mics are off when they head to the little boys' and girls' rooms.

Nick Briggs — the man who does all the Dalek voices — revealed all about the embarrassment facing the cast.

He tells the new Doctor Who magazine: "I wear headphones when I am on set and I have inputs from everyone else's microphones in them.

"I did once hear one of the other actors going to the loo. He forgot to turn his mic off!"

Meanwhile, John Barrowman says he wants to have Doctor Who's first-ever gay snog with Matt Smith.

The 43-year-old first appeared in the hit sci-fi show as Captain Jack Harkness five years ago.

And after returning for David Tennant's final episode, John admits he wants to go back to pucker up and make history with the new Doctor.

In an exclusive chat with the Daily Star Sunday, he revealed: "I'd love it if Captain Jack had a screen kiss with the new Doctor. That would be brilliant. I say, bring it on!

"I watched the recent series and thought Matt was really good as the new Doctor.

"I can't say if he's the best-looking Doctor — that's a secret. "But a kiss wouldn't be the worst thing."

Gay star John kissed ex-Doctor David Tennant at a press conference for the BBC show but not on screen.

There has been a gay kiss on the hit show in the past but not with the Doctor.

And after revealing he's got his eye on leading actor Matt, John admits he's desperate to get back on the show.

He said: "I really want to be back on Doctor Who — Captain Jack should be in the new series.

"He was mentioned in the last series so I'm hoping that means he'll be returning.

I haven't heard anything from producers but if they wanted me back, that would be brilliant."

John's character was given spin-off show Torchwood after he proved a hit with viewers.

And John has promised the fourth series of the show will be bigger and better than ever.

The new run will be a joint venture between BBC Wales and US channel Starz.

The show has proved a massive hit across the pond after it was aired on BBC America.