Everyone has a favourite Doctor Who as a matter of accident of birth, not of taste 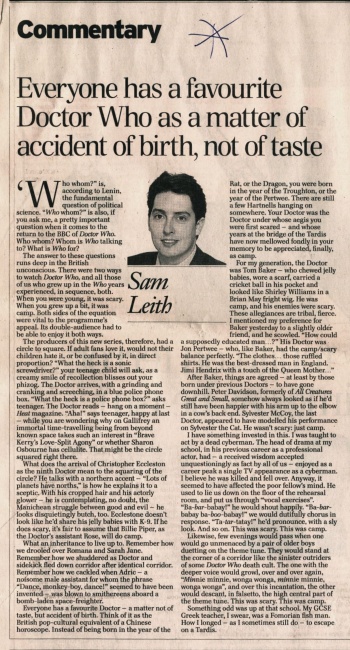 "Who whom?" is, according to Lenin, the fundamental

question of political science. "Who whom?" is also, if you ask me, a pretty important question when it comes to the return to the BBC of Doctor Who. Who whom? Whom is Who talking to? What is Who for?

The answer to these questions runs deep in the British unconscious. There were two ways to watch Doctor Who, and all those of us who grew up in the Who years experienced, in sequence, both. When you were young, it was scary. When you grew up a bit, it was camp. Both sides of the equation were vital to the programme's appeal. Its double-audience had to be able to enjoy it both ways.

The producers of this new series, therefore, had a circle to square. If adult fans love it, would not their children hate it, or be confused by it, in direct proportion? "What the heck is a sonic screwdriver?" your teenage child will ask, as a creamy smile of recollection blisses out your phizog. The Doctor arrives, with a grinding and cranking and screeching, in a blue police phone box. "What the heck is a police phone box?" asks teenager. The Doctor reads — hang on a moment Heat magazine. "Aha!" says teenager, happy at last — while you are wondering why on Gallifrey an immortal time-travelling being from beyond known space takes such an interest in "Brave Kerry's Love-Split Agony" or whether Sharon Osbourne has cellulite. That might be the circle squared right there.

What does the arrival of Christopher Eccleston as the ninth Doctor mean to the squaring of the circle? He talks with a northern accent — "Lots of planets hive norths," is how he explains it to a sceptic. With his cropped hair and his actorly glower — he is contemplating, no doubt, the Manichean struggle between good and evil — he looks disquietingly butch, too. Ecclestone doesn't look like he'd share his jelly babies with K-9. If he does scary, it's fair to assume that Billie Piper, as the Doctor's assistant Rose, will do camp.

What an inheritance to live up to. Remember how we drooled over Romana and Sarah Jane. Remember how we shuddered as Doctor and sidekick fled down corridor after identical corridor. Remember how we cackled when Adric — a noisome male assistant for whom the phrase "Dance, monkey-boy, dance!" seemed to have been invented — was blown to smithereens aboard a bomb-laden space-freighter.

Everyone has a favourite Doctor — a matter not of taste, but accident of birth. Think of it as the British pop-cultural equivalent of a Chinese horoscope. Instead of being born in the year of the

Rat, or the Dragon, you were born in the year of the Troughton, or the year of the Pertwee. There are still a few Hartnells hanging on somewhere. Your Doctor was the Doctor under whose aegis you were first scared — and whose years at the bridge of the Tardis have now mellowed fondly in your memory to be appreciated, finally, as camp.

For my generation, the Doctor was Tom Baker — who chewed jelly babies, wore a scarf, carried a cricket ball in his pocket and looked like Shirley Williams in a Brian May fright wig. He was camp, and his enemies were scary. These allegiances are tribal, fierce. I mentioned my preference for Baker yesterday to a slightly older friend, and he scowled. "How could a supposedly educated man...?" His Doctor was Jon Pertwee — who, like Baker, had the camp/scary balance perfectly. "The clothes... those ruffled shirts. He was the best-dressed man in England. Jim i Hendrix with a touch of the Queen Mother..."

After Baker, things are agreed — at least by those born under previous Doctors — to have gone downhill. Peter Davidson, formerly of All Creatures Great and Small, somehow always looked as if he'd still have been happier with his arm up to the elbow in a cow's back end. Sylvester McCoy, the last Doctor, appeared to have modelled his performance on Sylvester the Cat. He wasn't scary: just camp.

I have something invested in this. I was taught to act by a dead cyberman. The head of drama at my school, in his previous career as a professional actor, had — a received wisdom accepted unquestioningly as fact by all of us — enjoyed as a career peak a single TV appearance as a cyberman. I believe he was killed and fell over. Anyway, it seemed to have affected the poor fellow's mind. He used to lie us down on the floor of the rehearsal room, and put us through "vocal exercises". "Ba-bar-babay!" he would shout happily. "Ba-bar-babay ba-boo-babay!" we would dutifully chorus in response. "Ta-tar-tatay!" he'd pronounce, with a sly look. And so on. This was scary. This was camp.

Likewise, few evenings would pass when one would go unmenaced by a pair of older boys duetting on the theme tune. They would stand at the corner of a corridor like the sinister outriders of some Doctor Who death cult. The one with the deeper voice would growl, over and over again, "Minnie minnie, wonga wonga, minnie minnie, wonga wonga", and over this incantation, the other would descant, in falsetto, the high central part of the theme tune. This was scary. This was camp.

Something odd was up at that school. My GCSE Greek teacher, I swear, was a Fomorian fish man. How I longed — as I sometimes still do — to escape on a Tardis.