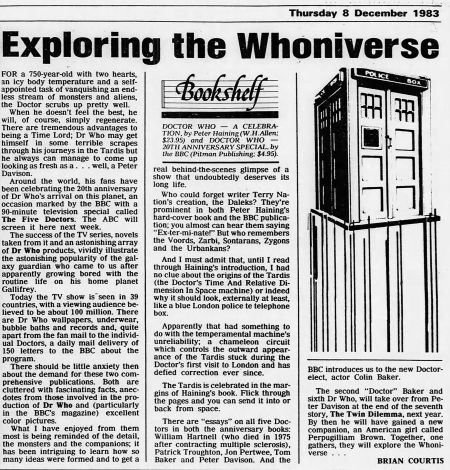 FOR a 750-year-old with two hearts, an icy body temperature and a self-appointed task of vanquishing an endless stream of monsters and aliens, the Doctor scrubs up pretty well.

When he doesn't feel the best, he will, of course, simply regenerate. There are tremendous advantages to being a Time Lord; Dr Who may get himself in some terrible scrapes through his journeys in the Tardis but he always can manage to come up looking as fresh as a ... well, a Peter Davison.

Around the world, his fans have been celebrating the 20th anniversary of Dr Who's arrival on this planet, an occasion marked by the BBC with a 90-minute television special called The Five Doctors. The ABC will screen it here next week.

The success of the TV series, novels taken from it and an astonishing array of Dr Who products, vividly illustrate the astonishing popularity of the galaxy guardian who came to us after apparently growing bored with the routine life on his home planet Gallifrey.

Today the TV show is seen in 39 countries, with a viewing audience believed to be about 100 million. There are Dr Who wallpapers, underwear, bubble baths and records and, quite apart from the fan mail to the individual Doctors, a daily mail delivery of 150 letters to the BBC about the program.

There should be little anxiety then about the demand for these two comprehensive publications. Both are cluttered with fascinating facts, anecdotes from those involved in the production of Dr Who and (particularly in the BBC's magazine) excellent color pictures.

What I have enjoyed from them most is being reminded of the detail, the monsters and the companions; it has been intriguing to learn how so many ideas were formed and to get a real behind-the-scenes glimpse of a show that undoubtedly deserves its long life.

Who could forget writer Terry Nation's creation, the Daleks? They're prominent in both Peter Haining's hard-cover book and the BBC publication; you almost can hear them saying "Ex-ter-mi-nate!" But who remembers the Voords, Zarbi, Sontarans, Zygons and the Urbankans?

And I must admit that, until I read through Haining's introduction, I had no clue about the origins of the Tardis (the Doctor's Time And Relative Dimension In Space machine) or indeed why it should look, externally at least, like a blue London police to telephone box.

Apparently that had something to do with the temperamental machine's unreliability; a chameleon circuit which controls the outward appearance of the Tardis stuck during the Doctor's first visit to London and has defied correction ever since.

The Tardis is celebrated in the margins of Haining's book. Flick through the pages and you can send it into or back from space.

There are "essays" on all five Doctors in both the anniversary books: William Hartnell (who died in 1975 after contracting multiple sclerosis), Patrick Troughton, Jon Pertwee, Tom Baker and Peter Davison. And the BBC introduces us to the new Doctor-elect, actor Colin Baker.

The second "Doctor" Baker and sixth Dr Who, will take over from Peter Davison at the end of the seventh story, The Twin Dilemma, next year. By then he will have gained a new companion, an American girl called Perpugilliam Brown. Together, one gathers, they will explore the Whoniverse ...