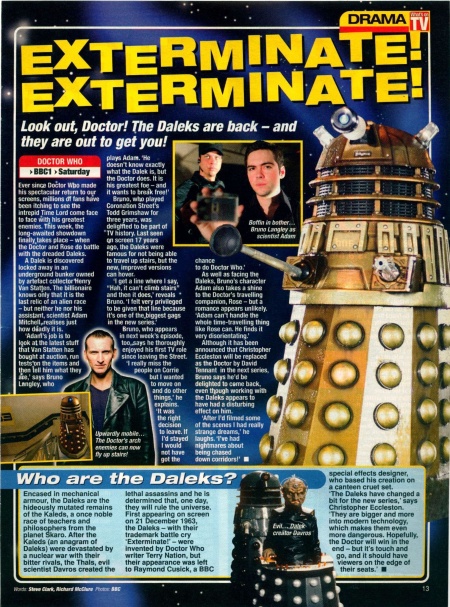 Look out, Doctor! The Daleks are back - and they are out to get you!

Ever since Doctor Who made his spectacular return to our screens, millions of fans have been itching to see the intrepid Time Lord come face to face with his greatest enemies. This week, the long-awaited showdown finally takes place — when the Doctor and Rose do battle with the dreaded Daleks.

A Dalek is discovered locked away in an underground bunker owned by artefact collector Henry Van Staften. The billionaire knows only that it is the last relic of an alien race — but neither he nor his assistant, scientist Adam Mitchell realises just how deadly it is.

'Adam's job is to look at the latest stuff that Van Statten has bought at auction, run tests on the items and then tell him what they are,' says Bruno Langley, who plays Adarn. 'He doesn't know exactly what the Dalek is, but the Doctor does. It is his greatest foe — and it wants to break free!'

Bruno, who played Coronation Street's Todd Grimshaw for three years, was delighted to be part of TV history. Last seen on screen 17 years ago, the Daleks were famous for not being able to travel up stairs, but the new, improved versions can hover.

'I get a line where I say, "Hah, it can't climb stairs" and then it does,' reveals Bruno. 'I felt very privileged to be given that line because it's one of the biggest gags in the new series.'

Bruno, who appears in next week's episode, too, says he thoroughly enjoyed his first TV role since leaving the Street. 'I really miss the people on Corrie but I wanted to move on and do other things,' he explains. 'It was the right decision to leave. If I'd stayed I would not have got the chance to do Doctor Who.'

As well as facing the Daleks, Bruno's character Adam also takes a shine to the Doctor's travelling companion, Rose — but a romance appears unlikely. 'Adam can't handle the whole time-travelling thing like Rose can. He finds it very disorientating.'

Although it has been announced that Christopher Eccleston will be replaced as the Doctor by David Tennant in the next series, Bruno says he'd be delighted to came back, even though working with the Daleks appears to have had a disturbing effect on him.

'After I'd filmed some of the scenes I had really strange dreams,' he laughs. 'I've had nightmares about being chased down corridors!'

Who are the Daleks?

Encased in mechanical armour, the Daleks are the hideously mutated remains of the Kaleds, a once noble race of teachers and philosophers from the planet Skaro. After the Kaleds (an anagram of Daleks) were devastated by a nuclear war with their bitter rivals, the Thals, evil scientist Davros created the

lethal assassins and he is determined that, one day, they will rule the universe. First appearing on screen on 21 December 1963, the Daleks — with their trademark battle cry 'Exterminate!' — were invented by Doctor Who writer Terry Nation, but their appearance was left to Raymond Cusick, a BBC special effects designer, who based his creation on a canteen cruet set.

'The Daleks have changed a bit for the new series,' says Christopher Eccleston. 'They are bigger and more into modern technology, which makes them even more dangerous. Hopefully, the Doctor will win in the end — but it's touch and go, and it should have viewers on the edge of their seats.'