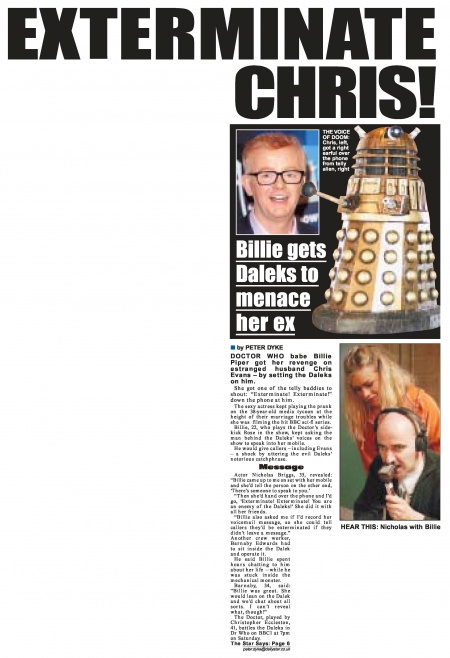 Billie gets Daleks to menace her ex

DOCTOR WHO babe Billie Piper got her revenge on estranged husband Chris Evans — by setting the Daleks on him.

She got one of the telly baddies to shout: "Exterminate! Exterminate!" down the phone at him.

The sexy actress kept playing the prank on the 38-year-old media tycoon at the height of their marriage troubles while she was filming the hit BBC sci-fi series. Billie, 22, who plays the Doctor's sidekick Rose in the show, kept asking the man behind the Daleks' voices on the show to speak into her mobile.

He would give callers — including Evans — a shock by uttering the evil Daleks' notorious catchphrase.

Actor Nicholas Briggs, 35, revealed: "Billie came up to me on set with her mobile and she'd tell the person on the other end, 'There's someone to speak to you.'

"Then she'd hand over the phone and I'd go, 'Exterminate! Exterminate! You are an enemy of the Daleks!' She did it with all her friends.

"Billie also asked me if I'd record her voicemail message, so she could tell callers they'd be exterminated if they didn't leave a message." Another crew worker, Barnaby Edwards had to sit inside the Dalek and operate it.

He said Billie spent hours chatting to him about her life — while he was stuck inside the mechanical monster. Barnaby, 34, said: "Billie was great. She would lean on the Dalek and we'd chat about all sorts. I can't reveal what, though!"

The Doctor, played by Christopher Eccleston, 41, battles the Daleks in Dr Who on BBC1 at 7pm on Saturday.

Caption: HEAR THIS: Nicholas with Billie

Caption: THE VOICE OF DOOM: Chris, left, got a right earful over the phone from telly alien, right.