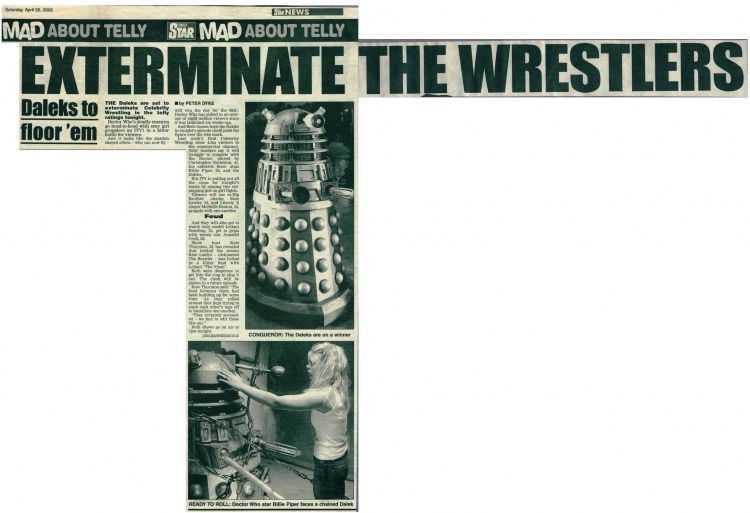 THE Daleks are set to exterminate Celebrity Wrestling in the telly ratings tonight.

Doctor Who's deadly enemies go head-to-head with sexy girl grapplers on ITV1 in a bitter battle for viewers.

And it looks like the dustbin shaped aliens - who can now fly - will win the day for the BBC. Doctor Who has pulled in an average of eight million viewers since it was launched six weeks ago.

And Beeb bosses hope the Daleks in tonight's episode could push the figure over the 10m mark.

Last week's first Celebrity Wrestling drew 4.3m viewers to the commercial channel. Telly insiders say it will struggle to compete with the Doctor, played by Christopher Eccleston, 41, his sidekick Rose, alias Billie Piper, 22, and the Daleks.

But ITV is pulling out all the stops for tonight's tussle by staging two eye-popping girl-on-girl fights. Viewers will see ex-Big Brother champ Kate Lawler, 24, and Liberty X singer Michelle Heaton, 24, grapple with one another.

And they will also get to watch sexy model Leilani Dowding, 24, get to grips with tennis star Annabel Croft, 38.

Show host Kate Thornton, 32, has revealed that behind the scenes Kate Lawler - nicknamed The Brawler - was locked in a bitter feud with Leilani "The Vixen".

Both were desperate to get into the ring to slug it out. The clash will be shown in a future episode. Kate Thornton said: "The feud between them had been building up for some time. As they rolled around they kept trying to yank each other's tops off to humiliate one another. "They certainly succeeded - we had to edit those bits out."

Both shows go on air at 7pm tonight.

Caption: CONQUEROR: The Daleks are on a winner