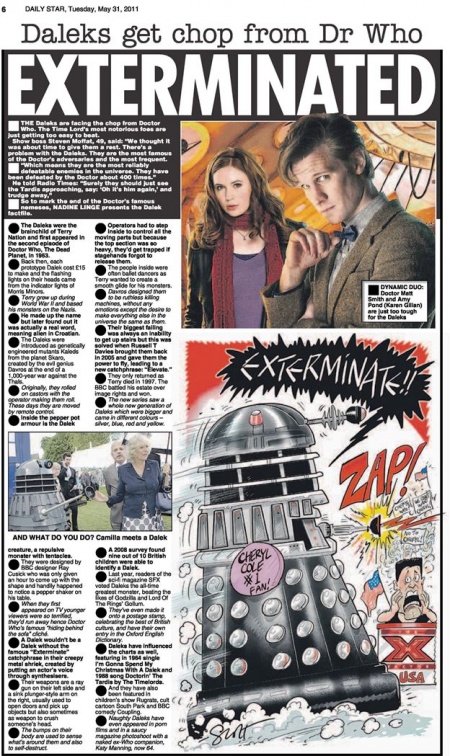 Daleks get chop from Dr Who

THE Daleks are facing the chop from Doctor Who. The Time Lord's most notorious foes are just getting too easy to beat.

Show boss Steven Moffat, 49, said: "We thought it was about time to give them a rest. There's a problem with the Daleks. They are the most famous of the Doctor's adversaries and the most frequent.

"Which means they are the most reliably defeatable enemies in the universe. They have been defeated by the Doctor about 400 times." He told Radio Times: "Surely they should just see the Tardis approaching, say: 'Oh it's him again,' and trudge away,"

So to mark the end of the Doctor's famous nemeses, NADINE LINGE presents the Dalek factfile.

The Daleks were the brainchild of Terry Nation and first appeared in the second episode of Doctor Who, The Dead Planet, in 1963.

Back then, each prototype Dalek cost £15 to make and the flashing lights on their heads came from the indicator lights of Morris Minors.

Terry grew up during World War II and based his monsters on the Nazis.

He made up the name III but later found out it was actually a real word, meaning alien in Croatian.

The Daleks were introduced as genetically engineered mutants Kaleds from the planet Skaro, created by the evil genius Davros at the end of a 1,000-year war against the Thals.

Originally, they rolled on castors with the operator making them roll. These days they are moved by remote control.

Inside the pepper pot armour is the Dalek creature, a repulsive monster with tentacles.

They were designed by BBC designer Ray Cusick who was only given an hour to come up with the shape and handily happened to notice a pepper shaker on his table.

When they first appeared on TV younger viewers were so terrified, they'd run away hence Doctor Who's famous hiding behind the sofa" cliché.

A Dalek wouldn't be a Dalek without the famous "Exterminate" catchphrase in their creepy metal shriek, created by putting an actor's voice through synthesisers.

Their weapons are a ray gun on their left side and a sink plunger-style arm on the right, usually used to open doors and pick up objects but also sometimes as weapon to crush someone's head.

The bumps on their body are used to sense what's around them and also to self-destruct.

Operators had to step inside to control all the moving parts but because the top section was so heavy, they'd get trapped if stagehands forgot to release them.

AI The people inside were often ballet dancers as Terry wanted to create a smooth glide for his monsters.

Davros designed them to be ruthless killing machines, without any emotions except the desire to make everything else in the universe the same as them.

Their biggest failing was always an inability to get up stairs but this was solved when Russell T Davies brought them back in 2005 and gave them the power to fly, leading to a new catchphrase: "Elevate."

They only returned as Terry died in 1997. The BBC battled his estate over image rights and won.

The new series saw a whole new generation of Daleks which were bigger and came in different colours —silver, blue, red and yellow.

A 2008 survey found III nine out of 10 British children were able to identify a Dalek.

Last year, readers of the sci-fi magazine SFX voted Daleks the all-time greatest monster, beating the likes of Godzilla and Lord Of The Rings' Gollum.

They've even made it onto a postage stamp, celebrating the best of British culture, and have their own entry in the Oxford English Dictionary.

Daleks have influenced the charts as well, featuring in 1964 single I'm Gonna Spend My Christmas With A Dalek and 1988 song Doctorin' The Tardis by The Timelords.

And they have also been featured in children's show Rugrats, cult cartoon South Park and BBC comedy Coupling.

Caption: AND WHAT DO YOU DO? Camilla meets a Dalek