Exterminated:Dream of British Doctor Who film 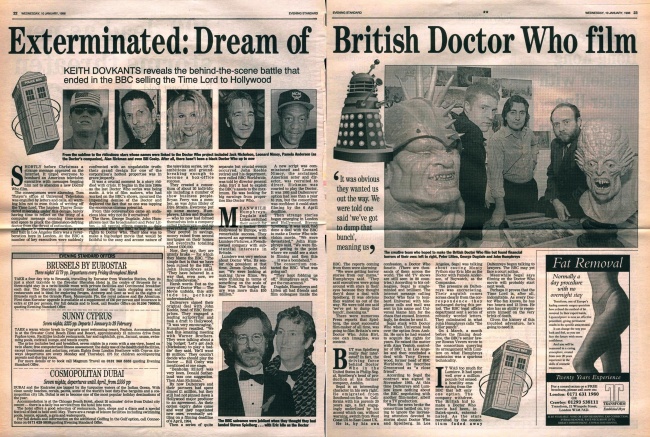 SHORTLY before Christmas a strange message appeared on the Internet. It urged everyone to bombard an American television executive with messages begging him not to abandon a new Doctor Who film.

The consequences were alarming. Tom Thayer's office at Universal Television was engulfed by letters and calls, all warning him not to even think of writing off the Time Lord. The hapless Thayer floundered miserably under this deluge, barely having time to reflect on the irony of a computer message crossing time-zones and space to pluck the dimension-defying doctor from the threat of extinction.

As Thayer's operation ground to a virtual halt in Los Angeles there was a reverberation here in London. At the BBC a number of key executives were suddenly confronted with an unpalatable truth: their grand design for one of the corporation's hottest properties was in grave jeopardy.

It was a crucial moment in a story riddled with crisis. It begins in the late 1980s as the last Doctor Who series was being made. A trio of film makers, who had worked on the BBC's shows, mourned the impending demise of the Doctor and deplored the fact that no one was tapping the enormous cinema potential.

From this conversation came an audacious idea: why not do it ourselves?

The three, George Dugdale, John Humphreys (not the broadcaster) and Peter Litten - all special effects experts - duly negotiated with the BBC to buy the film rights to Doctor Who. Their idea was to make a big-budget movie that would be faithful to the zany and arcane nature of the television series, yet be ambitious and ground-breaking enough to become a box-office success.

They created a consortium of about 20 individuals including a number of show business people. Bryan Ferry was a member, as was John Illsley of Dire Straits. Everyone put up some money. Humphreys, Litten and Dugdale - who by now had formed themselves into a company called Daltenreys - put up everything they owned. They poured in savings, money raised from second mortgages on their homes and overdrafts totalling almost £500,000.

Now, they say, they are utterly broke - for which they blame the BBC.

'The simple fact is that we have been ruined by the BBC,' John Humphreys said. 'They have behaved in a way that, even now, we find unbelievable.'

Harsh words. But as the story of Doctor Who - The Movie unfolds, this attitude is, perhaps understandable.

Daltenreys signed their original deal with John Keeble, head of BBC Enterprises. They engaged a leading scriptwriter and took a draft to Hollywood. 'It was very encouraging,' Humphreys recalled. 'We had this amazing meeting with Warner Brothers. They were talking about a big budget: 'Let's get Jack (Nicholson) to play a baddie' they said. 'He'll want $ 5 million.' They couldn't decide who should play the Doctor - Bill Cosby was mentioned at one stage.

'Denholm Elliott was very keen. Donald Sutherland was one suggestion.

By now Daltenreys and their partners had spent almost £1 million, but they still had not pinned down a Hollywood major producer to an agreement.

As their option expiry dates came and went they negotiated new ones, eventually settling on a filming deadline of 6 April, 1994.

Then a series of quite separate but crucial events occurred. John Keeble retired and his department, now called BBC Worldwide, was told by director general John Birt it had to exploit the BBC's assets to the maximum. He was looking for big earnings from properties like Doctor Who.

MEANWHILE Humphreys, Dugdale and Litten switched their search for a backer from Hollywood to Europe, with remarkable success. They secured an agreement with Lumiere Pictures, a French-owned company with substantial interests in Britain.

Lumiere was very serious about Doctor Who. Its senior vice president at that time, James Graham, told me: 'We were looking at making three films. We were thinking in terms of something on the scale of Star Trek. The budget figure was more than $ 30 million.'

A new script was commissioned and Leonard Nimoy, the acclaimed American actor and director, was recruited to direct. Rickman was courted to play the Doctor. It was 1993 and Daltenreys' option had less than a year to run, but the consortium was confident it could start filming by the 6 April deadline.

Then strange stories began emerging in London and Hollywood. Steven Spielberg, it was said, had done a deal with the BBC to make a Doctor Who television movie. 'We were devastated,' John Humphreys said. 'We were finally getting to the point where we could see a start to filming and then this ...it was a bombshell.'

The consortium contacted the BBC. What was going on?

'They kept fobbing us off,' Humphreys said. 'We got the run-around.'

Dugdale, Humphreys and Litten all had friends and film colleagues inside the BBC. The reports coming from them were alarming:

'We were getting horror stories from our mates,' Humphreys said. 'They said executives were going around with stars in their eyes because they thought they'd done a deal with Spielberg. It was obvious they wanted us out of the way. We were told one said 'we've got to dump that bunch', meaning us.'

There were numerous Press reports that Spielberg, the most successful film-maker of all time, was going to film Britain's own Doctor Who. John Birt, one can imagine, was content.

BUT was Spielberg really that interested? In fact, the driving force behind Doctor Who in the United States is Philip Segal, Spielberg's head of production at his former company, Amblin.

Segal is an interesting character in his own right. He emigrated from Southend-on-Sea to California with his parents 20 years ago, a fact engagingly underlined by his accent which can, without warning, switch from West Coast US to East Coast UK.

He is, by his own confession, a Doctor Who fanatic. (There are thousands of them across the world. The old TV shows are still seen in 80 countries.) According to his colleagues, Segal is single-minded and brilliant. The internet message calling Doctor Who fans to bombard Universal with telephone calls and mail was sent in his name and Universal blame him for the chaos that ensued. Interestingly, he denies he sent it.

Segal stuck with Doctor Who when Universal took over the option from Amblin. He says he had wanted to acquire the rights for years. He raised the matter with Alan Yentob, controller of BBC 1, in Los Angeles and then concluded a deal with Tony Greenwood, former head of BBC Worldwide. He describes Greenwood as 'a close friend'.

According to Segal the contract was signed in November 1993. At this time Daltenreys and Lumiere knew nothing about the BBC negotiating with another film-maker, albeit for a TV production.

When the news broke the consortium battled on, trying to ignore the increasing attention devoted to stories about Doctor Who and Spielberg. In Los Angeles, Segal was talking about casting Monty Python star Eric Idle as the Doctor with Pamela Anderson, of Baywatch, as the Companion.

The pressure on Daltenreys was excruciating. Their anguish comes across clearly from the correspondence they exchanged during this period. The BBC legal affairs department sent a series of robustly worded letters. They culminated in what John Humphreys calls 'the killer punch'.

On 4 March, a month before the filming deadline, the BBC's senior lawyer Rowan Vevers wrote to the consortium querying its arrangement with Lumiere on what Humphreys maintains was a spurious technicality.

IT WAS too much for Lumiere. It had spent well over a million pounds but sensed a hostility emanating from the BBC that left only one option. The company withdrew. The British bid to make a Doctor Who movie had been, in Dalek-speak, exterminated. As the stars recruited by the consortium faded away Daltenreys began talking to lawyers. The BBC may yet face a court action.

Meanwhile Segal says filming on the Doctor Who movie will probably start next week.

Perhaps it proves that the Time Lord is, after all, indomitable. As every Doctor Who fan knows, he has two hearts and 13 lives. He also has an ability to regenerate himself on the very brink of death.

Given the history of this troubled adventure, he's going to need it.