Fans still say Who is best 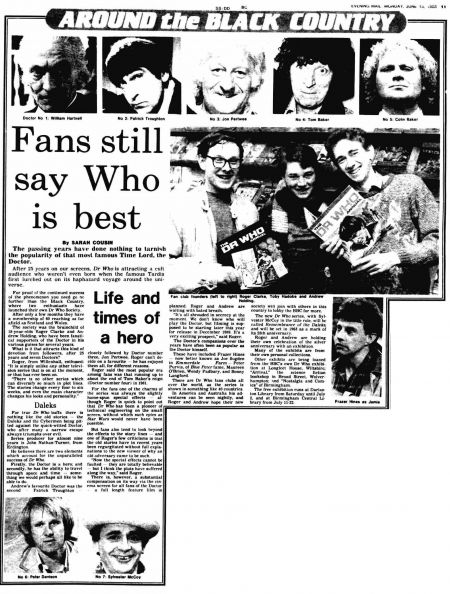 The passing years have done nothing to tarnish the popularity of that most famous Time Lord, the Doctor.

After 25 years on our screens. Dr Who is attracting it cult audience who weren't even born when the famous Tardis first lurched out on its haphazard voyage around the universe.

For proof of the continued emcees of the phenomenon you need go no further than the Black Country. where two enthusiasts have launched their own Dr Who Society.

After only a few months they have a membership of 60 reaching as far afield as Scotland and Wales.

The society was the brainchild of 18-year-olds Roger Clarke and Andrew Holding, who have been fanatical supporters of the Doctor in his various guitars for several years.

What is it that attracts this kind of devotion from followers, after 25 years and seven Doctors?

Roger, from Willenhall, enthused: "It is simply unlike any other television series that is on at the moment, or that has ever been on.

"There is no other series which can diversify so much in plot lines. The stories change every four to six weeks, and even the main character changes his looks and personality.

For true Dr Who buffs there is nothing like the old stories - the Daleks and the Cybermen being pitted against the quick-witted Doctor, who after many a narrow escape always triumphs over evil.

He believes there are two elements which account for the unparalleled success of Dr Who.

Firstly, the Doctor is a hero; and secondly, he has the ability to travel through space and time — something we would perhaps all like to be able to do.

Andrew's favourite Doctor was the second - Patrick Troughton - closely followed by Doctor number three, Jon Pertwee. Roger can't decide on a favorite - he has enjoyed them all, for different reasons.

Roger said the most popular era among fans was that running up to the end of Tom Baker's reign (Doctor number four) in 1981.

For the fans one of the charms of the series was always the slightly home-spun special effects - although Roger is quick to point out that Dr Who has been a pioneer of technical engineering on the small screen. without which such epics as Star Wars would never have been possible.

But fans also tend to look beyond the effects to the story lines and one of Roger's few criticisms is trial the old stories have in recent years been regurgitated without full explanations to the new viewer of why an old adversary came to be such.

'Now the special effects cannot be faulted - they are totally believable but I think the plots have suffered along the way" said Roger.

There is, however, a substantial compensation on its way via the cinema screen for all fans of the Doctor a full length feature film is planned. Roger and Andrew waiting with bated breath.

'It's all shrouded in secrecy at the moment. We don't know who will play the Doctor, but filming is supposed to be starting later this year for release in December 1989. It's a very exciting prospect.' said Roger.

The Doctor's companions over the years have often been as popular as the Doctor himself.

There are Dr Who fans elute all over the world. as the series is shown In something like 40 countries.

In America and Australia his adventures can be seen nightly, and Roger and Andrew hope their new society will join with others in this country to lobby the BBC for more.

The new Dr Who series, with Sylvester McCoy in the title role, will be called Remembrance of the Daleks and will be set in 1963 as a mark of its 23th anniversary.

Roger and Andrew are holding their own celebration of the silver anniversary with an exhibition.

Many of the exhibits are from their own personal collections.

Other exhibits are being loaned from the BBC's own Dr Who exhibition at Longleet House, Wiltshire, 'Arrival' the science fiction bookshop in Broad Street, Wolverhampton, and 'Nostalgia and Comic' of Birmingham.

The free exhibition runs at Darlaston Library from Saturday until July 2. and at Birmingham Central Library from July 11.22.