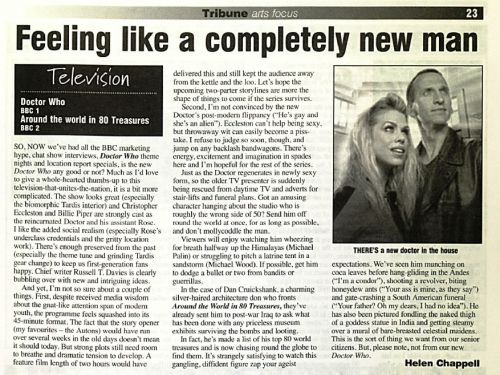 SO, NOW we've had all the BBC marketing hype, chat show interviews, Doctor Who theme nights and location report specials, is the new Doctor Who any good or not? Much as I'd love to give a whole-hearted thumbs-up to this television-that-unites-the-nation, it is a bit more complicated. The show looks great (especially the biomorphic Tardis interior) and Christopher Eccleston and Billie Piper are strongly cast as the reincarnated Doctor and his assistant Rose. I like the added social realism (especially Rose's underclass credentials and the gritty location work). There's enough preserved from the past (especially the theme tune and grinding Tardis gear change) to keep us first-generation fans happy. Chief writer Russell T. Davies is clearly bubbling over with new and intriguing ideas.

And yet, I'm not so sure about a couple of things. First, despite received media wisdom about the gnat-like attention span of modem youth, the programme feels squashed into its 45-minute format. The fact that the story opener (my favourites — the Autons) would have run over several weeks in the old days doesn't mean it should today. But strong plots still need room to breathe and dramatic tension to develop. A feature film length of two hours would have delivered this and still kept the audience away from the kettle and the loo. Let's hope the upcoming two-parter storylines are more the shape of things to come if the series survives.

Second, I'm not convinced by the new Doctor's post-modern flippancy ("He's gay and she's an alien"). Eccleston can't help being sexy. but throwaway wit can easily become a piss-take. I refuse to judge so soon, though, and jump on any backlash bandwagons. There's energy, excitement and imagination in spades here and I'm hopeful for the rest of the series.

Just as the Doctor regenerates in newly sexy form, so the older TV presenter is suddenly being rescued from daytime TV and adverts for stair-lifts and funeral plans. Got an amusing character hanging about the studio who is roughly the wrong side of 50? Send him off round the world at once, for as long as possible, and don't mollycoddle the man.

Viewers will enjoy watching him wheezing for breath halfway up the Himalayas (Michael Palin) or struggling to pitch a latrine tent in a sandstorm (Michael Wood). If possible, get him to dodge a bullet or two from bandits or guerrillas.

In the case of Dan Cruickshank, a charming silver-haired architecture don who fronts Around the World in 80 Treasures, they've already sent him to post-war Iraq to ask what has been done with any priceless museum exhibits surviving the bombs and looting.

In fact, he's made a list of his top 80 world treasures and is now chasing round the globe to find them. It's strangely satisfying to watch this gangling, diffident figure zap your ageist expectations. We've seen him munching on coca leaves before hang-gliding in the Andes ("I'm a condor"). shooting a revolver, biting honeydew ants ("Your ass is mine, as they say") and gate-crashing a South American funeral ("Your father? Oh my dears, I had no idea"). He has also been pictured fondling the naked thigh of a goddess statue in India and getting steamy over a mural of bare-breasted celestial maidens. This is the sort of thing we want from our senior citizens. But, please note, not from our new Doctor Who.

Caption: THERE'S a new doctor In the house