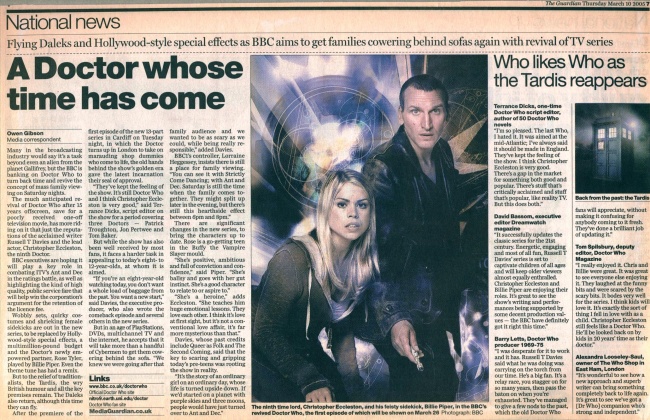 A Doctor whose time has come

Many in the broadcasting industry would say it's a task beyond even an alien from the planet Gallifrey, but the BBC is banking on Doctor Who to turn back time and revive the concept of mass family viewing on Saturday nights.

The much anticipated revival of Doctor Who after 15 years offscreen, save for a poorly received one-off television movie, has more riding on it that just the reputations of the acclaimed writer Russell T Davies and the lead actor, Christopher Eccleston, the ninth Doctor.

BBC executives are hoping it will play a key role in combating ITV's Ant and Dec in the ratings battle, as well as highlighting the kind of high quality, public service fare that will. kelp win the corporation's argument for the retention of licence fee.

Wobbly sets, quirky costumes and shrieking female sidekicks are out in the new series, to be replaced by Hollywood-style special effects, a multimillion-pound budget and the Doctor's newly empowered partner, Rose Tyler, played by Billie Piper. Even the theme tune has had a remit. But to the relief of traditionalists, the Tardis, the wry British humour and all the key premises remain. The Daleks also return, although this time they can fly.

After the premiere of the first episode of the new 13-part series in Cardiff on Tuesday night, in which the Doctor turns up in London to take on marauding shop dummies who come to life the old hands behind the show's golden era gave the latest incarnation their seal of approval.

But while the show has also been well received by most fans, it faces a harder task in appealing to today's eight to 12-year-olds, at whom it is aimed.

"If you're an eight-year-old watching today, you don't want a whole load of baggage from the past. You want a new start," said Davies, the executive producer, who also wrote the comeback episode and several others in the new series.

But in an age of PlayStations, DVDs, multichannel TV and the internet, he accepts that it will take more than a handful of Cybermen to get them cowering behind the sofa. "We knew we were going after that family audience and we wanted to be as scary as we could, while being really responsible," added Davies. BBC1's controller, Lorraine Heggessey, insists there is still a place for family viewing. "You can see it with Strictly Come Dancing; with Ant and Dec. Saturday is still the time when the family comes together. They might split up later in the evening, but there's still this hearthside effect between 6pm and 8pm." There are significant changes in the new series, to bring the characters up to date. Rose is a go-getting teen in the Buffy the Vampire Slayer mould.

"She's positive, ambitious and full of conviction and confidence," said Piper. "She's ballsy and goes with her gut instinct. She's a good character to relate to or aspire to."

"She's a heroine," adds Eccleston. "She teaches him huge emotional lessons. They love each other. I think it's love. at first sight, but it's not a conventional love affair, it's far more mysterious than that." Davies, whose past credits include Queer as Folk and The Second Coming, said that the key to scaring and gripping today's pre-teens was rooting the show in reality.

"It's the story of an ordinary girl on an ordinary day, whose life is turned Upside down. If we'd started on a planet with purple skies and three moons, people would have just turned over to Ant and Dec."

Caption: The ninth time lord, Christopher Eccleston, and his feisty sidekick, Billie Piper, in the BBC's revived Doctor Who, the first episode of which will be shown on March 26

Who likes Who as the Tardis reappears

"I'm so pleased. The last Who, I hated it. It was aimed at the mid-Atlantic; I've always said it should be made in England. They've kept the feeling of the show. I think Christopher Eccleston is very good. There's a gap in the market for something both good and popular. There's stuff that's critically acclaimed and stuff that's popular, like reality TV. But this does both."

"It successfully updates the classic series for the 21st century. Energetic, engaging and most of all fun, Russell T Davies' series is set to captivate children of all ages and will keep older viewers almost equally enthralled. Christopher Eccleston and Billie Piper are enjoying their roles. It's great to see the show's writing and performances being supported by some decent production values - the BBC have definitely got it right this time."

"I was desperate for it to work and it has. Russell T Davies said what he was doing was carrying on the torch from our time. He's a big fan. It's a relay race, you stagger on for so many years, then pass the baton on when you're exhausted. They've managed to give a few nods to the past, which the old Doctor Who fans will appreciate, without making it confusing for anybody coming to it fresh. They've done a brilliant job of updating it."

"I really enjoyed it. Chris and Billie were great. It was great to see everyone else enjoying it. They laughed at the funny bits and were scared by the scary bits. It bodes very well for the series. I think kids will love it. It's exactly the sort of thing I fell in love with as a child. Christopher Eccleston still feels like a Doctor Who. He'll be looked back on by kids in 20 years' time as their doctor."

Alexandra Looseley-Saul, owner of The Who Shop in East Ham, London

"It's wonderful to see how a new approach and superb writer can bring something completely back to life again. It's great to see we've got a (Dr Who) companion who's strong and independent."