Former 'Dr. Who' star wonders 'why all the fuss?' 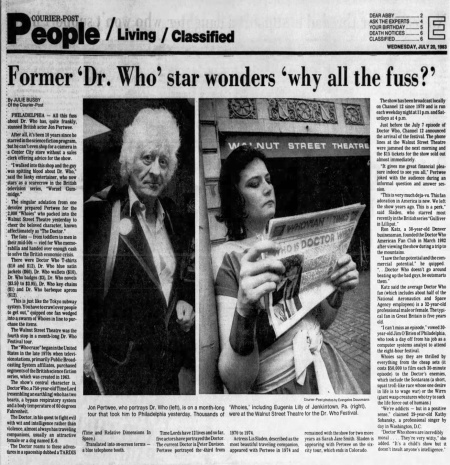 PHILADELPHIA — All this fuss about Dr. Who has, quite frankly, stunned British actor Jon Pertwee.

After all, it's been 10 years since he starred in the science fiction program, but he can't even shop for a camera in a Center City store without a sales clerk offering advice for the show.

"I walked into this shop and the guy was spitting blood about Dr. Who," said the lanky entertainer, who now stars as a scarecrow in the British television series, "Worzel Gummidge."

The singular adulation from one devotee prepared Pertwee for the 2,000 "Whoies" who packed into the Walnut Street Theatre yesterday to cheer the beloved character, known affectionately as "The Doctor."

The fans — from toddlers to men in their mid-50s — vied for Who memorabilia and handed over enough cash to solve the British economic crisis.

"This is just like the Tokyo subway system. You have to crawl over people to get out," quipped one fan wedged into a swarm of Whoies in line to purchase the items.

The Walnut Street Theatre was the fourth stop in a month-long Dr. Who Festival tour.

The "Who craze" began in the United States in the late 1970s when television stations, primarily Public Broadcasting System affiliates, purchased segments of the British science fiction series, which was created in 1963.

The show's central character is, Doctor Who, a 750-year-old Time Lord (resembling an earthling) who has two hearts, a bypass respiratory system and a body temperature of 60 degrees Fahrenheit.

The Doctor, in his quest to fight evil with wit and intelligence rather than violence, almost always has traveling companions, usually an attractive female or a dog named K-9.

The Doctor roams to these adventures in a spaceship dubbed a TARDIS (Time and Relative Dimensions In Space.)

Time Lords have 12 lives and so far, five actors have portrayed the Doctor. The current Doctor is peter Davison. Pertwee portrayed the.-third from 1970 to 1974

Actress Lis Sladen, described as the most beautiful traveling companion, appeared with Pertwee in 1974 and remained with the show for two more years as Sarah Jane Smith. Sladen is appearing with Pertwee on the six-city tour, which ends in Colorado.

The show has been broadcast locally on Channel 12 since 1979 and is run each weekday night at 11 p.m. and Saturdays at 4 p.m.

Just before the July 7 episode of Doctor Who, Channel 12 announced the arrival of the festival. The phone lines at the Walnut Street Theatre were jammed the next morning and the $15 tickets for the show sold out almost immediately.

"It gives me great financial pleasure indeed to see you all," Pertwee joked with the audience during an informal question and answer session.

"This is very much deja-vu. This fan adoration in America is new. We left the show years ago. This is a perk." said Sladen, who starred most recently in the British series "Gulliver in Lilliput."

Ron Katz, a 38-year-old Denver businessman, founded the Doctor Who American Fan Club in March 1982 after viewing the show during a trip to the mountains

"I saw the fun potential and the commercial potential," he quipped. "...Doctor Who doesn't go around beating up the bad guys, he outsmarts them."

Katz said the average Doctor Who fan (which includes about half of the National Aeronautics and Space Agency employees) is a 32-year-old professional male or female. The typical fan in Great Britain is five years old.

"I can't miss an episode," vowed 30-year-old Jim O'Brien of Philadelphia, who took a day off from his job as a computer systems analyst to attend the eight-hour festival.

Wholes say they are thrilled by everything from the cheap sets (it costs $50,000 to film each 30-minute episode) to the Doctor's enemies, which include the Sontarans (a short, squat troll-like race whose one desire in life is to wage war) or the Wirrn (giant wasp creatures who try to suck the life force out of humans.)

"We're addicts — but in a positive sense," claimed 29-year-old Kathy Sobansky, a professional singer by day in Washington, D.C.

"Doctor Who shows are incredibly moral ... . They're very witty," she added. "It's a child's show but it doesn't insult anyone's intelligence."

Caption: Jon Pertwee, who portrays Dr. Who (left), is on a month-long tour that took him to Philadelphia yesterday. Thousands of 'Whoies,' including Eugenia Lilly of Jenkintown, Pa. (right), were at the Walnut Street Theatre for the Dr. Who Festival.