Forward into the past with Satellite 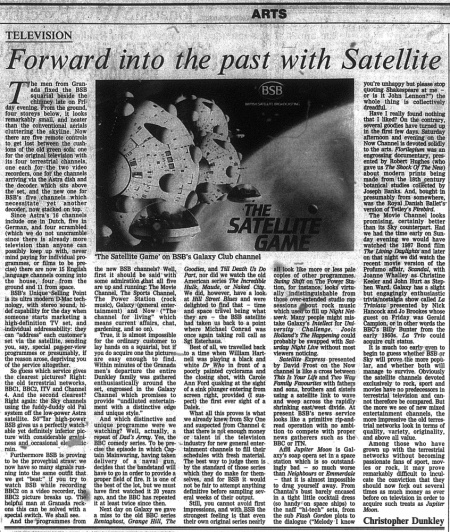 The men from Granada fixed the BSB squarial beside the chimney late on Friday evening. From the ground, four storeys below, it looks remarkably small, and neater than the conventional aerials cluttering the skyline. Now there are five remote controls to get lost between the cushions of the old green sofa:one for the original television with its four terrestrial channels, one each for the two video recorders, one for the channels arriving via the Astra dish and the decoder which sits above the set, and the new one for BSB's five channels which necessitate yet another decoder, now stacked on top.

Since Astra's 16 channels include one in Dutch, five in German, and four scrambled (which we do not unscramble since there is already more television than anyone can possibly keep up with, never mind paying for individual programmes, or films to be precise) there are now 15 English language channels coming into the house, four from the ground and 11 from space.

BSB's Unique Selling Point is its ultra modern D-Mac technology, with stereo sound, hi-def capability for the day when someone starts marketing a high-definition TV set, and individual addressability: they can 'address' each customer's set via the satellite, sending you, say, special pay-per-view programmes or presumably, if the reason arose, depriving you of the service altogether.

Furthermore BSB is proving to be the proverbial straw: we now have so many signals running into the same outfit that we get 'beat:' if you try to watch BSB while recording BBC2 on a video recorder, the BBC2 picture breaks up. The helpful man at Granada reckons this can be solved with a special switch. We shall see.

And the programmes from the new BSB channels? Well, first it should be said with some admiration that all five are up and running: The Movie Channel, The Sports Channel, The Power Station (rock music), Galaxy (general entertainment) and Now ('The channel for living' which means current affairs, chat, gardening, and so on).

True, it is almost impossible for the ordinary customer to lay hands on a squarial, but if you do acquire one the pictures are easy enough to find. Within minutes of the Granada men's departure the entire Dunkley family was gathered enthusiastically around the set, engrossed in the Galaxy Channel which promises to provide 'undiluted entertainment with a distinctive edge and unique style.'

And which distinctive and unique programme were we watching? Well, actually, a repeat of Dad's Army. Yes, the BBC comedy series. To be precise the episode in which Captain Mainwaring, having taken delivery of a naval gun, decides that the bandstand will have to go in order to provide a proper field of fire. It is one of the best of the lot, but we must have first watched it 20 years ago, and the BBC has repeated it at least twice since then.

Next day on Galaxy we gave a miss to the old BBC series Rentaghost, Grange Hill, The Goodies, and Till Death Us Do Part, nor did we watch the old American series The Incredible Hulk, Maude, or Naked City. We did, however, have a look at Hill Street Blues and were delighted to find that - time and space travel being what they are - the BSB satellite had taken us back to a point where Michael Conrad was once again taking roll call as Sgt Esterhaus.

Best of all, we travelled back to a time when William Hartnell was playing a black and white Dr Who in front of a poorly painted cyclorama and the closing shot, with Carole Ann Ford quaking at the sight of a sink plunger entering from screen right, provided (I suspect) the first ever sight of a Dalek.

What all this proves is what we already knew from Sky One and suspected from Channel 4: that there is not enough money or talent in the television industry for new general entertainment channels to fill their schedules with fresh material. The best way to judge them is by the standard of those series which they do make for themselves, and for BSB it would not be fair to attempt anything definitive before sampling several weeks of their output.

Still, you cannot avoid first impressions, and with BSB the strongest feeling is that even their own original series nearly all look like more or less pale copies of other programmes. Swing Shift on The Power Station, for instance, looks virtually indistinguishable from those over-extended studio rap sessions about rock music which used to fill up Night Network. Many people might mistake Galaxy's Intellect for University Challenge. Jools Holland's The Happening could probably be swapped with Saturday Night Live without most viewers noticing.

Satellite Express presented by David Frost on the Now channel is like a cross between This Is Your Life and Two Way Family Favourites with fathers and sons, brothers and sisters using a satellite link to wave and weep across the rapidly shrinking east/west divide. At present BSB's news service looks like a primitive rip-and-read operation with no ambition to compete with proper news gatherers such as the BBC or ITN.

And Jupiter Moon is Galaxy's soap opera set in a space station which is so outstandingly bad - so much worse than Neighbours or Emmerdale - that it is almost impossible to drag yourself away. From Chantal's bust barely encased in a tight little cocktail dress (so handy on space ships) to the naff 'hi-tech' sets, from the sub Flash Gordon plots to the dialogue ('Melody I know you're unhappy but please stop quoting Shakespeare at me - or is it John Lennon?') the whole thing is collectively dreadful.

Have I really found nothing that I liked? On the contrary, several goodies have turned up in the first few days. Saturday afternoon and evening on the Now Channel is devoted solidly to the arts. Florilegium was an engrossing documentary, presented by Robert Hughes (who gave us the Shock Of The New) about modern prints being made from the 18th century botanical studies collected by Joseph Banks. And, bought in presumably from somewhere, was the Royal Danish Ballet's version ofetley's Firebird.

The Movie Channel looks promising, certainly better than its Sky counterpart. Had we had the time early on Sunday evening we would have watched the 1987 Bond film The Living Daylights and later on that night we did watch the recent movie version of the Profumo affair, Scandal, with Joanne Whalley as Christine Keeler and John Hurt as Stephen Ward. Galaxy has a slight but engagingly enthusiastic trivia/nostalgia show called La Triviata presented by Nick Hancock and Jo Brookes whose guest on Friday was Gerald Campion, or in other words the BBC's Billy Bunter from the early 1950s. La Triv could acquire cult status.

It is much too early even to begin to guess whether BSB or Sky will prove the more popular, and whether both will manage to survive. Obviously the satellite channels devoted exclusively to rock, sport and movies have no predecessors in terrestrial television and cannot therefore be compared. But the more we see of new mixed entertainment channels, the more impressive the old terrestrial networks look in terms of quality, variety, originality, and above all value.

Among those who have grown up with the terrestrial networks without becoming passionate fans of sport, movies or rock, it may prove remarkably difficult to inculcate the conviction that they should now fork out several times as much money as ever before on television in order to acquire such treats as Jupiter Moon.