From 'X-Files' to the next files 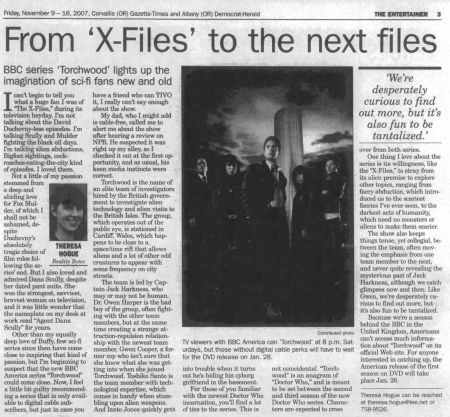 I can't begin to tell you what a huge fan I was of Me X-Files," during its television heyday. I'm not talking about the David Duchovny-less episodes. I'm talking Scully and Mulder fighting the black oil days. I'm talking alien abductions, Bigfoot sightings, cockroaches-eating-the-city kind of episodes. I loved them.

Not a little of my passion stemmed from a deep and abiding love for Fox Mulder, of which I shall not be ashamed, despite Duchovny's absolutely tragic choice of film roles following the series' end. But I also loved and admired Dana Scully, despite her dated pant suits. She was the strongest, savviest, bravest woman on television, and it was little wonder that the nameplate on my desk at work read "Agent Dana Scully" for years.

Other than my equally deep love of Buffy, few sci-fi series since then have come close to inspiring that kind of passion, but I'm beginning to suspect that the new BBC America series "Torchwood" could come close. Now, I feel a little bit guilty recommending a series that is only available to digital cable subscribers, but just in case you have a friend who can TIVO it, I really can't say enough about the show.

My dad, who I might add is cable-free, called me to alert me about the show after hearing a review on NPR. He suspected it was right up my alley, so I checked it out at the first opportunity, and as usual, his keen media instincts were correct.

Torchwood is the name of an elite team of investigators hired by the British government to investigate alien technology and alien visits to the British Isles. The group, which operates out of the public eye, is stationed in Cardiff, Wales, which happens to be close to a space/time rift that allows aliens and a lot of other odd creatures to appear with some frequency on city streets.

The team is led by Captain Jack Harkness, who may or may not be human. Dr. Owen Harper is the bad boy of the group, often fighting with the other team members, but at the same time creating a strange attraction-repulsion relationship with the newest team member, Gwen Cooper, a former cop who isn't sure that she knew what she was getting into when she joined Torchwood. Toshiko Santo is the team member with technological expertise, which comes in handy when stumbling upon alien weapons. And Ianto Jones quickly gets into trouble when it turns out he's hiding his cyborg girlfriend in the basement.

For those of you familiar with the newest Doctor Who incarnation, you'll find a lot of ties to the series. This is not coincidental. "'Torchwood" is an anagram of "Doctor Who," and is meant to be set between the second and third season of the new Doctor Who series. Characters are expected to cross over from both series.

One thing I love about the series is its willingness, like the "X-Files," to stray from its alien premise to explore other topics, ranging from faery abduction, which introduced us to the scariest faeries I've ever seen, to the darkest acts of humanity, which need no monsters or aliens to make them scarier.

The show also keeps things tense, yet collegial, between the team, often moving the emphasis from one team member to the next, and never quite revealing the mysterious past of Jack Harkness, although we catch glimpses now and then. Like Gwen, we're desperately curious to find out more, but it's also fun to be tantalised.

Because were a season behind the BBC in the United Kingdom, Americans can't access much information about "Torchwood" on its official Web site. For anyone interested in catching up, the American release of the first season on DVD will take place Jan. 28.

Caption: TV viewers with BBC America can 'Torchwood' at 8 p.m. Saturdays, but those without digital cable perks will have to wait for the DVD release on Jan. 28.