From Daleks To Dracula! 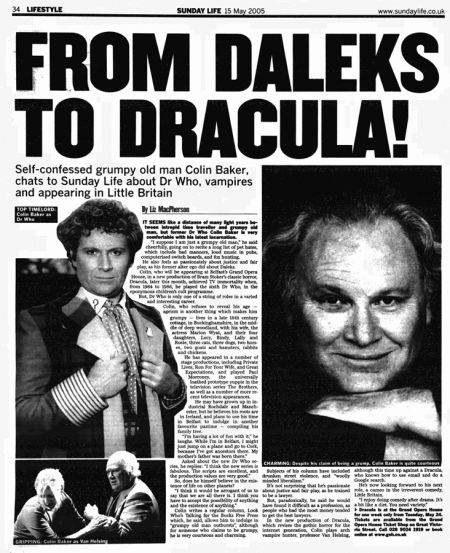 IT SEEMS like a distance of ninny light yews between intrepid time traveller and grump old man, but former Dr Who Colin Baker ls very comfortable with Ids latest Incarnation.

"I suppose I am just a grumpy old man: he said cheerfully, going on to recite a long list of pet bates, which include bad manners, loud music in pubs, computerised switch boards, and fox hunting.

He also feels as passionately about justice and fair play, as his former alter ego did about Daleks.

Colin, who will be appearing at Belfast's Grand Opera House, in a new production of Bram Stoker's classic horror, Dracula, later this month, achieved TV immortality when, from 1984 to 1986, be played the sixth Dr Who, in the eponymous children's cult programme.

But, Dr Who is only one of a string of roles in a varied and interesting career.

Colin, who refuses to reveal his age — ageism is another thing which makes him grumpy — lives in a late 18th century cottage, in Buckinghamshire, in the middle of deep woodland, with his wife, the actress Marion Wyatt, and their four daughters, Lucy, Bindy, Lally and Rosie, three cats, three dogs, two horses, two goats and hamsters, rabbits and chickens.

He has appeared in a number of stage productions, including Private Lives, Run For Your Wife, and Great Expectations, and played Paul Morroney, the universally loathed prototype yuppie in the television series The Brothers, as well as a number of more recent television appearances.

He may have grown up in industrial Rochdale and Manchester, but he believes his roots are in Ireland, and plans to use his time in Belfast to indulge in another favourite pastime — compiling his family tree.

"I'm having a lot of fun with it," he laughs. While I'm in Belfast, I might just jump on a plane and go to Cork, because I've got ancestors there. My mother's father was born there"

Asked about the new Dr Who series, he replies: "I think the new series is fabulous. The scripts are excellent, and the production values are very good."

So, does he himself believe in the existence of life on other planets?

"I think it would be arrogant of us to say that we are all there is. I think you have to accept the possibility of anything and the existence of anything?

Colin writes a regular column, Look Who's 'Bilking for the Bucks Free Press which, he said, allows him to indulge in "grumpy old man outbursts", although for someone who claims to be grumpy, he is very courteous and charming.

Subjects of his column have included drunken street violence, and "woolly minded liberalism"

It's not surprising that he's passionate about justice and fair play, as he trained to be a lawyer.

But, paradoxically, he said he would have found it difficult as a profession, as people who had the most money tended to get the best lawyers.

In the new production of Dracula, which revises the gothic horror for the internet generation, Colin plays arch vampire hunter, professor Van Helsing,

although this time up against a Dracula, who knows how to use email and do a Google search.

He's now looking forward to his nest role, a cameo in the irreverent comedy, Little Britain.

"I enjoy doing comedy after drama. It's a bit like a diet. You need variety?

CHARMING: Despite his claim of being a grump. Colin Baker is quite courteous