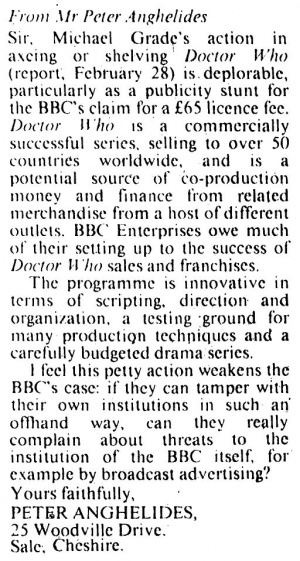 Sir, Michael Grade's action in axeing or shelving Doctor Who (report, February 28) is deplorable, particularly as a publicity stunt for the BBC's claim for a £65 licence fee. Doctor Who is a commercially successful series, selling to over 50 countries worldwide, and is a potential source of co-production money and finance from related merchandise from a host of different outlets. BBC Enterprises owe much of their setting up to the success of Doctor Who sales and franchises.

The programme is innovative in terms of scripting, direction and organization, a testing ground for many production techniques and a carefully budgeted drama series.

I feel this petty action weakens the BBC's case: if they can tamper with their own institutions in such an offhand way, can they really complain about threats to the institution of the BBC itself, for example by broadcast advertising?