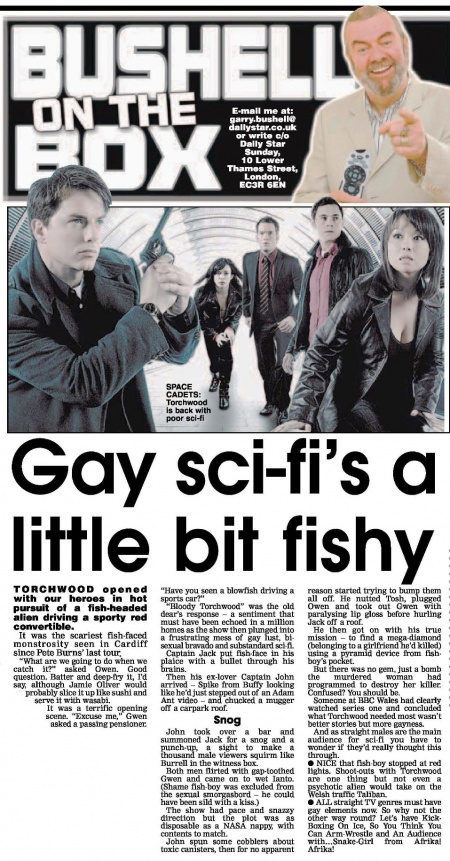 TORCHWOOD opened with our heroes in hot pursuit of a fish-headed alien driving a sporty red convertible.

It was the scariest fish-faced monstrosity seen in Cardiff since Pete Burns' last tour.

"What are we going to do when we catch it?" asked Owen. Good question. Batter and deep-fry it, I'd say, although Jamie Oliver would probably slice it up like sushi and serve it with wasabi.

It was a terrific opening scene. "Excuse me," Gwen asked a passing pensioner. "Have you seen a blowfish driving a sports car?"

"Bloody Torchwood" was the old dear's response — a sentiment that must have been echoed in a million homes as the show then plunged into a frustrating mess of gay lust, bisexual bravado and substandard sci-fi.

Captain Jack put fish-face in his plaice with a bullet through his brains.

Then his ex-lover Captain John arrived — Spike from Buffy looking like he'd just stepped out of an Adam Ant video — and chucked a mugger off a carpark roof.

John took over a bar and summoned Jack for a snog and a punch-up, a sight to make a thousand male viewers squirm like Burrell in the witness box.

Both men flirted with gap-toothed Gwen and came on to wet Ianto. (Shame fish-boy was excluded from the sexual smorgasbord — he could have been sild with a kiss.)

The show had pace and snazzy direction but the plot was as disposable as a NASA nappy, with contents to match.

John spun some cobblers about toxic canisters, then for no apparent reason started trying to bump them all off. He nutted Tosh, plugged Owen and took out Gwen with paralysing lip gloss before hurling Jack off a roof.

He then got on with his true mission — to find a mega-diamond (belonging to a girlfriend he'd killed) using a pyramid device from fish-boy's pocket.

But there was no gem, just a bomb the murdered woman had programmed to destroy her killer. Confused? You should be.

Someone at BBC Wales had clearly watched series one and concluded what Torchwood needed most wasn't better stories but more gayness.

And as straight males are the main audience for sci-fi you have to wonder if they'd really thought this through.

Caption: SPACE CADETS: Torchwood is back with poor sci-fi