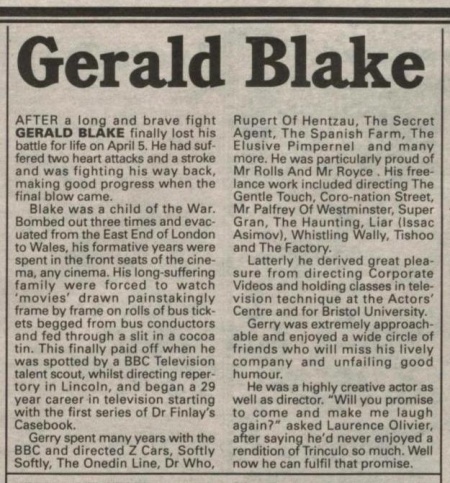 AFTER a long and brave fight GERALD BLAKE finally lost his battle for life on April 5. He had suffered two heart attacks and a stroke and was fighting his way back, making good progress when the final blow came.

Blake was a child of the War. Bombed out three times and evacuated from the East End of London to Wales, his formative years were spent in the front seats of the cinema, any cinema. His long-suffering family were forced to watch 'movies' drawn painstakingly frame by frame on rolls of bus tickets begged from bus conductors and fed through a slit in a cocoa tin. This finally paid off when he was spotted by a BBC Television talent scout, whilst directing repertory in Lincoln, and began a 29 year career in television starting with the first series of Dr Finlay's Casebook.

Gerry spent many years with the BBC and directed Z Cars, Softly Softly, The Onedin Line, Dr Who, Rupert Of Hentzau, The Secret Agent, The Spanish Farm, The Elusive Pimpernel and many more. He was particularly proud of Mr Rolls And Mr Royce . His freelance work included directing The Gentle Touch, Coronation Street, Mr Palfrey Of Westminster, Super Gran, The Haunting, Liar (Issac Asimov), Whistling Wally, Tishoo and The Factory.

Latterly he derived great pleasure from directing Corporate Videos and holding classes in television technique at the Actors' Centre and for Bristol University.

Gerry was extremely approachable and enjoyed a wide circle of friends who will miss his lively company and unfailing good humour.

He was a highly creative actor as well as director. "Will you promise to come and make me laugh again?" asked Laurence Olivier, after saying he'd never enjoyed a rendition of Trinculo so much. Well now he can fulfil that promise.