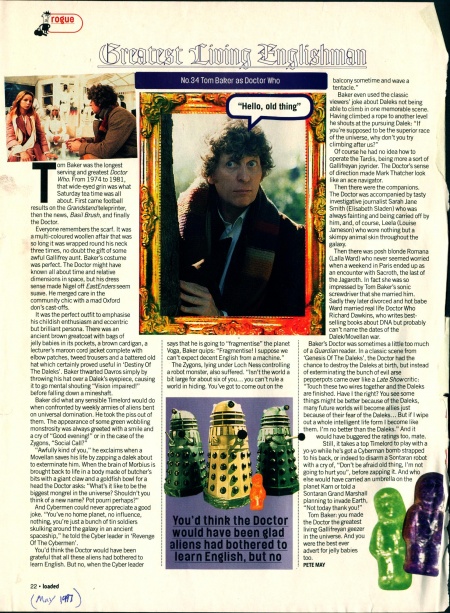 No 34 Tom Baker as Doctor Who

Tom Baker was the longest serving and greatest Doctor Who. From 1974 to 1981, that wide-eyed grin was what Saturday tea time was all about. First came football results on the Grandstand teleprinter, then the news, Basil Brush, and finally the Doctor.

Everyone remembers the scarf. It was a multi-coloured woollen affair that was so long it was wrapped round his neck three times, no doubt the gift of some awful Gallifrey aunt. Baker's costume was perfect. The Doctor might have known all about time and relative dimensions in space, but his dress sense made Nigel off EastEnders seem suave. He merged care in the community chic with a mad Oxford don's cast-offs.

It was the perfect outfit to emphasise his childish enthusiasm and eccentric but brilliant persona. There was an ancient brown greatcoat with bags of jelly babies in its pockets, a brown cardigan, a lecturer's maroon cord jacket complete with elbow patches, tweed trousers and a battered old hat which certainly proved useful in 'Destiny Of The Daleks'. Baker thwarted Davros simply by throwing his hat over a Dalek's eyepiece, causing it to go mental shouting "Vision impaired!" before falling down a mineshaft.

Baker did what any sensible Timelord would do when confronted by weekly armies of aliens bent on universal domination. He took the piss out of them. The appearance of some green wobbling monstrosity was always greeted with a smile and a cry of "Good evening!" or in the case of the Zygons, "Social Call?"

"Awfully kind of you," he exclaims when a Movellan saves his life by zapping a dalek about to exterminate him. When the brain of Morbius is brought back to life in a body made of butcher's bits with a giant claw and a goldfish bowl for a head the Doctor asks: "What's it like to be the biggest mongrel in the universe? Shouldn't you think of a new name? Pot pourri perhaps?"

And Cybermen could never appreciate a good joke. "You've no home planet, no influence, nothing, you're just a bunch of tin soldiers skulking around the galaxy in an ancient spaceship," he told the Cyber leader in 'Revenge Of The Cybermen'.

You'd think the Doctor would have been grateful that all these aliens had bothered to learn English. But no, when the Cyber leader says that he is going to "fragmentise" the planet Voga, Baker quips: "Fragmentise! I suppose we can't expect decent English from a machine."

The Zygons, lying under Loch Ness controlling a robot monster, also suffered. "Isn't the world a bit large for about six of you... you can't rule a world in hiding. You've got to come out on the balcony sometime and wave a tentacle."

Baker even used the classic viewers' joke about Daleks not being able to climb in one memorable scene. Having climbed a rope to another level he shouts at the pursuing Dalek: "If you're supposed to be the superior race of the universe, why don't you try climbing after us?"

Of course he had no idea how to operate the Tardis, being more a sort of Gallifreyan joyrider. The Doctor's sense of direction made Mark Thatcher look like an ace navigator.

Then there were the companions. The Doctor was accompanied by tasty investigative journalist Sarah Jane Smith (Elisabeth Sladen) who was always fainting and being carried off by him, and, of course, Leela (Louise Jameson) who wore nothing but a skimpy animal skin throughout the galaxy.

Then there was posh blonde Romana (Lalla Ward) who never seemed worried when a weekend in Paris ended up as an encounter with Sacroth, the last of the Jagaroth. In fact she was so impressed by Tom Baker's sonic screwdriver that she married him. Sadly they later divorced and hot babe Ward married real life Doctor Who Richard Dawkins, who writes bestselling books about DNA but probably can't name the dates of the Dalek/Movellan war.

Baker's Doctor was sometimes a little too much of a Guardian reader. In a classic scene from 'Genesis Of The Daleks', the Doctor had the chance to destroy the Daleks at birth, but instead of exterminating the bunch of evil arse pepperpots came over like a Late Showcritic: "Touch these two wires together and the Daleks are finished. Have I the right? You see some things might be better because of the Daleks, many future worlds will become allies just because of their fear of the Daleks... But if I wipe out a whole intelligent life form I become like them. I'm no better than the Daleks." And it would have buggered the ratings too, mate.

Still, it takes a top Timelord to play with a yo-yo while he's got a Cyberman bomb strapped to his back, or indeed to disarm a Sontaran robot with a cry of, "Don't be afraid old thing, I'm not going to hurt you", before zapping it. And who else would have carried an umbrella on the planet Karn or told a Sontaran Grand Marshall planning to invade Earth, "Not today thank you!"

Tom Baker: you made the Doctor the greatest living Gallifreyan geezer in the universe. And you were the best ever advert for jelly babies too.