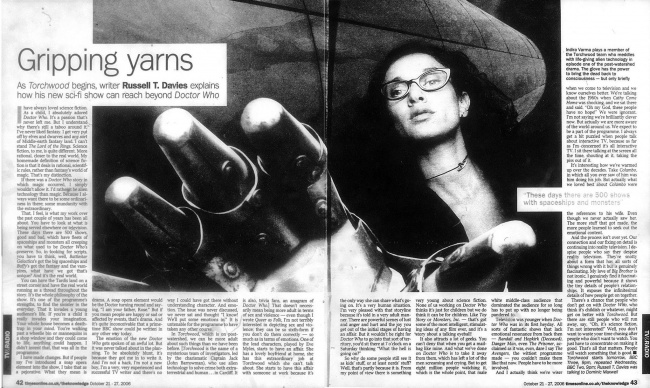 As Torchwood begins, writer Russell T. Davies explains how his new sci-fi show can reach beyond Doctor Who

I have always loved science fiction. As a child, I absolutely adored Doctor Who. It's a passion that's never left me. But I understand why there's still a taboo around it. I've never liked fantasy. I get very put off by elves and dwarves and any girt of Middle-earth fantasy land. I can't stand The Lord of the Rings. Science fiction, to me, is quite different. More rational, closer to the real world. My homemade definition of science fiction is that it deals in rational, scientific rules, rather than fantasy's world of magic That's my distinction.

If there was a Doctor Who story in which magic occurred. I simply wouldn't allow it I'd rather it be alien technology than magic. Because I always want there to be some ordinariness in there: some mundanity with the extraordinary.

That, I feel, is what my work over the past couple of years has been all about You have to look at what is being served elsewhere on television. These days there are 500 shows, good and bad, which have fleets of spaceships and monsters all creeping on what used to be Doctor Who's preserve. So, in looking for scripts, you have to think, well, Battlestar Galactica's got the big spaceships and Buffy's got the fantasy and the vampires, what have we got that's unique? And it's the real world.

You can have the Tardis land on a street corner and have the real world running as a thread throughout the story. It's the whole philosophy of the show. It's one of the programme's strengths, to find the sinister in the everyday. That it invades a young audience's life. If you're a child it redly invades your imagination. Your whole house becomes a deathtrap in your mind. You're walking past a wheelie bin or mannequins in a shop window and they could come to life, anything could happen. I didn't invent that that was all in the programme.

I have made changes. But if people say I've introduced a soap opera element into the show, I take that as a pejorative What they mean is drama. A soap opera element would be the Doctor turning round and saying. "I am your father, Rose." But if you mean people are happy or sad or affected by events, that's drama. And it's quite inconceivable that a prime-time BBC show could he written in any other way today.

The emotion of the new Doctor Who gets spoken of an awful lot. But it was never talked about in the planning. To be absolutely blunt, it's because they got me in to write it And I'm not a hack. I'm not a new boy, I'm a very, very experienced and successful TV writer and there's no way I could have got there without understanding character. And emotion. The issue was never discussed, we never sat and thought 1 know! Well put some emotions in." It is untenable for the programme to have taken any other course.

In Torchwood, which is on post-watershed, we can be more adult about such things than we have been before. [Torchwood is the name of a mysterious team of investigators, led by the charismatic Captain Jack (John Barrowman), who use alien technology to solve crime both extraterrestrial and human ... in Cardiff It is also, trivia fans, an anagram of Doctor Who.] That doesn't necessarily mean being more adult in terms of sex and violence — even though I wrote Queer as Folk, I'm not terribly interested in depicting sex and violence; they can be so sixth-form if you don't do them correctly — so much as in terms of emotions. One of the lead characters, played by Eve Myles, starts to have an affair. She has a lovely boyfriend at home, she has this extraordinary job at Torchwood which she can't talk about. She starts to have this affair with someone at work because it's the only way she can share what's going on. It's a very human situation. I'm very pleased with that storyline because it's told in a very adult manner. There are powerful scenes of lust and anger and hurt and the joy you get out of the initial stages of having an affair. But it wouldn't be right for Doctor Who to go into that sort of territory, you'd sit there at 7 o'clock on a Saturday thinking "What the hell is going on?"

So why do some people still see it as kids' stuff, or at least nerds' stuff? Well, that's partly because it is. From my point of view there is something very young about science fiction. None of us working on Doctor Who thinks it's just for children but we do think it can be for children. Like Toy Story or Monsters, Inc. — that's got some of the most intelligent, stimulating ideas of any film ever, and it's a 'story about a talking eyeball!

It also attracts a lot of geeks. You can't deny that when you get a mailbag like mine. And what we've done on Doctor Who is to take it away from them, which has left a lot of the men screaming and crying. But to get eight million people watching it, which is the whole point, that male white middle-class audience that dominated the audience for so long has to put up with no longer being pandered to.

Television was younger when Doctor Who was in its first heyday. All sorts of fantastic shows that lack emotional resonance from back then — Randall and Hopkirk (Deceased), Danger Man, even The Prisoner, acclaimed as it was, even, dare I say The Avengers, the wittiest programme made — you couldn't make them like that now. People have to be more involved.

And I actually think we're wiser when we come to television and we know ourselves better. We're talking about the 1960s when Cathy Come Home was shocking. and we sat there and said. "Oh my God. these people have no hope!" We were ignorant. I'm not saying we're brilliantly clever now. But actually we are more aware of the world around us. We expect to be a part of the programme. I always get a bit puzzled when people talk about interactive TV. because as far as I'm concerned it's all interactive TV. I sit there talking at the screen all the time, shouting at it. taking the piss out of it

It's interesting how we've warmed up over the decades. Take Columbo, in which all you ever saw of him was him doing his job. But actually what we loved best about Colombo were the references to his wife. Even though we never actually saw her. The more stuff that got made, the more people learned to seek out the emotional content.

And the process isn't over yet. Our connection and our fixing on detail is continuing into reality television. I despise people who say they despise reality television. They're snotty about a form that has all sorts of things wrong with it but is genuinely fascinating. My love of Big Brother is not ironic. I genuinely find it fascinating and powerful because it shows the tiny details of people's relationships. It exposes the infinitesimal details of how people get on together.

There's a chance that people who don't get on with Doctor Who, who think it's childish or whatever, might get on better with Torchwood. But there are still people who will run away, say, "Oh, it's science fiction, I'm not interested!" Well, you don't want to waste your time chasing after people who don't want to watch. You just have to concentrate on making it good. That's all that matters. People will watch something that is good.

Caption: Indira Varma plays a member of the Torchwood team who meddles with life-giving alien technology in episode one of the post-watershed drama. The glove has the power to bring the dead back to consciousness — but only briefly