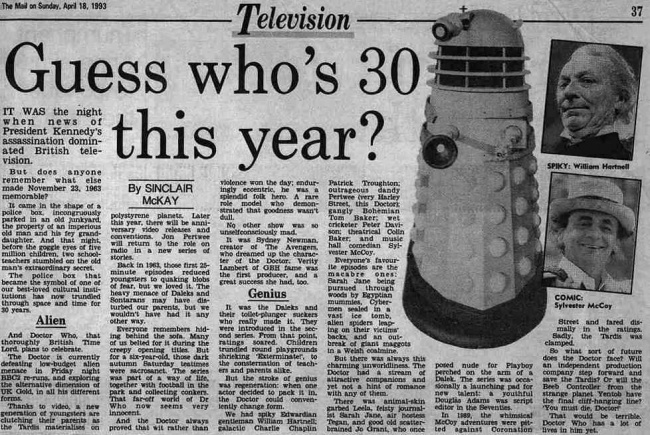 It was the night when news of President Kennedy's assassination dominated British television.

But does anyone remember what else made November 23, 1963 memorable?

It came in the shape of a police box, incongruously parked in an old junkyard, the property of an imperious old man and his fey granddaughter. And that night, before the goggle eyes of five million children, two schoolteachers stumbled on the old man's extraordinary secret.

The police box that became the symbol of one of our best-loved cultural institutions has now trundled through space and time for 30 years.

And Doctor Who, that thoroughly British Time Lord, plans to celebrate.

The Doctor is currently defeating low-budget alien menace in Friday night BBC2 re-runs, and exploring the alternatives dimension of UK gold, in all his different forms.

Thanks to video, a new generation of youngsters are clutching their parents as the TARDIS materializes on polystyrene planets. Later this year, there will be anniversary of video releases and conventions. Jon Pertwee will return to the role on radio and a new series of stories.

Back in 1963, those first 25-minute episodes reduced youngsters to quaking blobs of fear, but we loved it. The heavy menace of Daleks and sometimes may have disturbed our parents, but we wouldn't have had it any other way.

Everyone remembers hiding behind the sofa. Many of us belted for it during the creepy opening titles. But for a six-year-old, those dark autumn Saturday teatimes were sacrosanct. The series was part of a way of life, together with football in the park and clicked in clunkers. That far off world of Doctor Who now seems very innocent.

And the Doctor always proved that with rather than violence won the day: endearingly eccentric, he was a splendid folk hero. A rare of role model who demonstrated that goodness wasn't doll.

No other show was so unselfconsciously mad.

It was Sydney Newman, creator of the avengers, who dreamed up the character of the Dr.. Verity Lambert of GBH fame was the first producer, and a great success she had, too.

It was the Daleks and their toilet plunger suckers who really made it. They were introduced in the second series. From that point, ratings soared. Children trundled round playgrounds shrieking exterminate, to the consternation of teachers and parents alike.

But the stroke of genius was regeneration: when one actor decided to pack it in, the Doctor could conveniently change form.

But everyone's favorite episodes of the macabre ones: Sarah Jane being pursued through woods by Egyptian mummies. Cybermen sealed in a vast ice tomb, alien spiders sleeping on their victims backs, and an outbreak of giant maggots in a Welsh coal mine.

But there was always this charming on worldliness. The Doctor had a stream of attractive companions and yet not a hint of romance with any of them.

There was animal skin of garb that Leela, feisty journalist Sarah Jane, air hostess Tegan, and good old scatterbrained Jo Grant, who was posed nude for Playboy perched on the arm of a Dalek. The series was occasionally a launching pad for new talent: a useful Douglas Adams was script editor in the seventies.

In 1989, the whimsical McCoy adventures were pitted against Coronation Street and fared dismally in the ratings. Sadly, the Tardis was clamped.

So what sort of future does the Doctor face? Will an independent production company step forward and save the Tardis? Or will the Beeb controller from the strange planet Yentob have the final cliff-hanging light? 'You must die, Doctor!'

That would be terrible. Doctor Who has a loss of lives left in him yet.