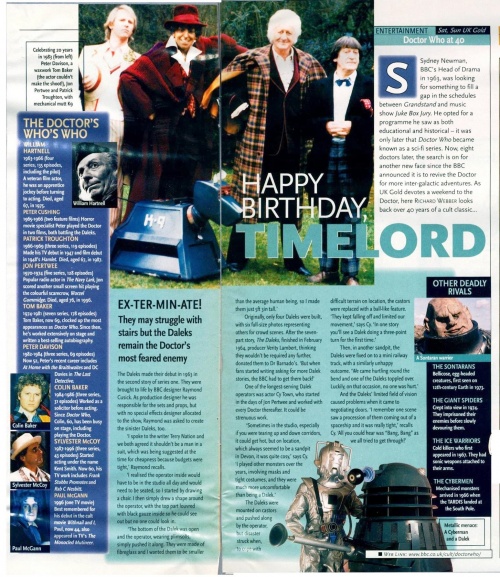 Sydney Newman, BBC's Head of Drama in 1963, was looking for something to fill a gap in the schedules between Grandstand and music show Juke Box Jury. He opted for a programme he saw as both educational and historical — it was only later that Doctor Who became known as a sci-fi series. Now, eight doctors later, the search is on for another new face since the BBC announced it is to revive the Doctor for more inter-galactic adventures. As UK Gold devotes a weekend to the Doctor, here RICHARD WEBBER looks back over 4o years of a cult classic...

The Daleks made their debut in 1963 in the second story of series one. They were brought to life by BBC designer Raymond Cusick. As production designer he was responsible for the sets and props, but with no special effects designer allocated to the show, Raymond was asked to create the sinister Daleks, too.

'I spoke to the writer Terry Nation and we both agreed it shouldn't be a man in a suit, which was being suggested at the time for cheapness because budgets were tight,' Raymond recalls.

'I realised the operator inside would have to be in the studio all day and would need to be seated, so I started by drawing a chair. I then simply drew a shape around the operator, with the top part louvred with black gauze inside so he could see out but no one could look in.

'The bottom of the Dalek was open and the operator, wearing plimsolls, simply pushed it along. They were made of fibreglass and I wanted them to be smaller than the average human being, so I made them just 5ft 3in tall.'

Originally, only four Daleks were built, with six full-size photos representing others for crowd scenes. After the seven-part story, The Daleks, finished in February 1964, producer Verity Lambert, thinking they wouldn't be required any further, donated them to Dr Barnado's. 'But when fans started writing asking for more Dalek stories, the BBC had to get them back!'

One of the longest-serving Dalek operators was actor Cy Town, who started in the days of Jon Pertwee and worked with every Doctor thereafter. It could be strenuous work.

'Sometimes in the studio, especially if you were tearing up and down corridors, it could get hot, but on location, which always seemed to be a sandpit in Devon, it was quite cosy,' says Cy. 'I played other monsters over the years, involving masks and tight costumes, and they were mu:: more uncomfortable than being a Dalek.'

The Daleks were mounted on castors and pushed along by the operator, but disaster struck when, to cope with difficult terrain on location, the castors were replaced with a ball-like feature. 'They kept falling off and limited our movement,' says Cy. 'In one story you'll see a Dalek doing a three-point turn for the first time.'

Then, in another sandpit, the Daleks were fixed on to a mini railway track, with a similarly unhappy outcome. 'We came hurtling round the bend and one of the Daleks toppled over. Luckily, on that occasion, no one was hurt.'

And the Daleks' limited field of vision caused problems when it came to negotiating doors. 'I remember one scene saw a procession of them coming out of a spaceship and it was really tight,' recalls Cy. 'All you could hear was "Bang, Bang" as we all tried to get through!'

THE GIANT SPIDERS Crept into view in 1974. They imprisoned their enemies before slowly devouring them.

THE ICE WARRIORS Cold killers who first appeared in 1967. They had sonic weapons attached to their arms.

THE CYBERMEN Mechanised monsters arrived in 1966 when the TARDIS landed at the South Pole.

THE DOCTOR'S WHO'S WHO

A veteran film actor, he was an apprentice jockey before turning to acting. Died, aged 67, in 1975.

1974-1981 (seven series, 178 episodes) Tom Baker, now 69, clocked up the most appearances as Doctor Who. Since then, he's worked extensively on stage and written a best-selling autobiography.

Now 52, Peter's recent career includes At Home with the Braithwaites and DC Davies in The Last Detective.

Worked as a solicitor before acting. Since Doctor Who, Colin, 60, has been busy on stage, including playing the Doctor.

Best remembered for his debut in the cult movie Withnail and I, Paul, now 44, also appeared in TV's The Monocled Mutineer.

Caption: Metallic menace: A Cyberrnan and a Dalek