Happy birthday to Who (The Canberra Times) 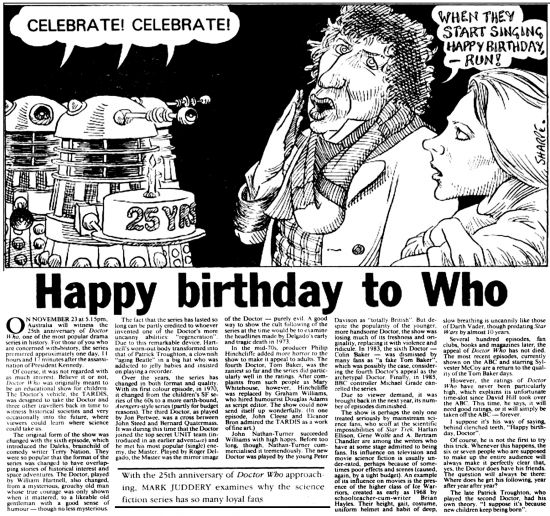 With the 25th anniversary of Doctor Who approaching, MARK JUDDERY examines why the science fiction series has so many loyal fans

ON NOVEMBER 23 at 5.15prn, Australia will witness the 25th anniversary of Doctor Who, one of the most popular drama series in history. For those of you who are concerned with...history, the series premiered approximately one day. 11 hours and 17 minutes after the assassination of President Kennedy.

Of course. it was not regarded with as much interest. Believe it or not, Donor Who was originally meant to be an educational show for children. The Doctor's vehicle, the TARDIS, was designed to take the Doctor and three other travellers back in time to witness historical societies and very occasionally into the Mute, where viewers could learn where science could take us.

The original form of the show was changed with the sixth episode, which introduced the Daleks, brainchild of comedy writer Terry Nation. They were so popular that the format of the series was changed to have overlapping stories of historical interest and space adventures. The Doctor, played by William Hartnell, also changed. from a mysterious, grouchy old man whose true courage was only shown when it mattered, to a likeable old gentleman with a good sense of humour — though nu less mysterious.

The fact that the series has lasted so long can be panty credited to whoever invented one of the Ocelot's mom uncanny abilities: "regeneration". Due to this remarkable device, Hart-ell's worn-out body transformed into that of Patrick Troughton, a clownish "aging Beetle" in a big hat who was addicted to jelly babies and insisted OR playing a recorder.

Over the years, the series has changed in both format and quality. With its first colour episode, in 1970, it changed from the children's SF series oldie 60s to a more earth-bound, Avengers-style series (partly for budget reasons). The third Doctor, as played by Jon Pertwee. was a cross between John Steed and Bernard Quatermass. It was during this time that the Doctor joined the top secret UNIT team (introduced in an earlier advent,. and he met his most popular (single) enemy, the Master. Played by Roger Delgado, the Master was the mirror image of the Doctor — purely evil. A pod way to show the cult following of the series at the time would be to examine the headlines made by Delgado's early and tragic death in 1973.

In the mid-70s, producer Philip Hinchcliffe added more horror to the show to make it appeal to adults. The fourth Doctor. Tom Baker, was the zaniest so far and the series did particularly well in the ratings. After complaints from such people as Mary Whitehouse, however, Hinchcliffe was replaced by Graham Williams, who hired humourist Douglas Adams as script editor. The show could now send itself up wonderfully. (In one episode, John Cleese and Eleanor Bron admired the TARDIS as a work of fine art.)

John Nathan-Turner succeeded Williams with high hopes. Before too long, though, Nathan-Turner commercialised it tremendously. The new Doctor Who played by the young Peter Davison as "totally British". But despite the popularity of the younger, more handsome Doctor, the show was losing much of its freshness and originality, replacing it with violence and ridicule. In 1983, the sixth Doctor — Colin Baker — was dismissed by many fans as "a fake Tom Baker", which was possibly the case, considering the fourth Doctor's appeal as the archetypal Doctor. Finally. in 1985, BBC controller Michael Grade cancelled the series.

Due to viewer demand, it was brought back in the nest year, its number of episodes diminished.

The show is perhaps the only one treated seriously by mainstream science fans, who scoff at the scientific impossibilities of Scar Trek. Florian Ellison, Gene Wolfe and A. Bertram Chandler are among the writers who have at some stage admitted to being fan. Its influence on television and movie science fiction is usually under-rated, perhaps because of sometimes poor effects and scenes (caused, again, by a tight budget). An example of its influence on movies is the presence of the higher class of Ice Warriors, created as early as 1968 by schoolteacher-cum-writer Brian Hayles. Their height, gait, costume, uniform helmet and habit of deep, slow breathing is uncannily like those of Darth Vader, though predating Star Wars by almost 10 years.

Several hundred episodes, fan clubs, books and magazines later, the appeal of Doctor Who has not died. The most recent episodes. currently shown on the ABC and starring Sylvester McCoy are a return to the quality of the Tom Baker days.

However, the ratings of Doctor Who have never been particularly high, which explains its unfortunate time-slot since David Hill took over the ABC. This time, he says, it will need good ratings, or it will simply be taken off the ABC - forever.

I suppose it's his way of saying, behind clenched teeth, "Happy birthday, Doctor."

Of course, he is not the first to try this trick. Whenever this happens, the six or seven people who are supposed to make up the entire audience will always make it perfectly clear that, yes, the Doctor does have his friend. The question will always be there: Where does he get his following, year after year after year?

The late Patrick Troughton, who played the second Doctor, had his own theory. "I suppose it's because new children keep being born".