He's still the hero, no matter who he kisses 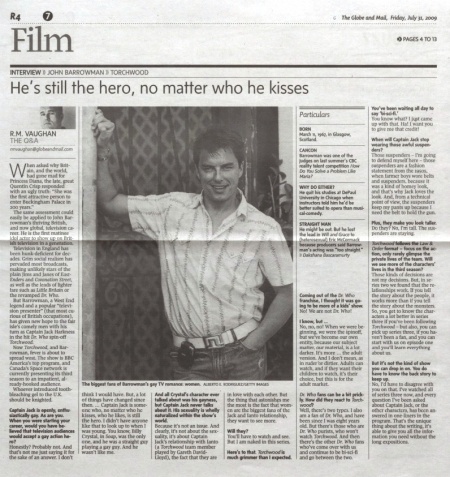 When asked why Britain and the world had gone mad for Princess Diana, the late, great Quentin Crisp responded with an ugly truth "She was the first attractive person to enter Buckingham Palace in 200 years."

The same assessment could easily be applied to John Barrowman's thriving British, and now global, television career. He is the first matinee idol actor to show up on British television in a generation.

Television in England has been hunk-deficient for decades. Grim social realism has pervaded most broadcasts, making unlikely stars of the plain Jims and Janes of EastEnders and Coronation Street, as well as the leads of lighter fare such as Little Britain or the revamped Dr. Who.

But Barrowman, a West End legend and a popular "television presenter' (that most curious of British occupations), has given new hope to the fair isle's comely men with his turn as Captain Jack Harkness in the hit Dr. Who spinoff Torchwood.

Now Torchwood, and Barrowman fever is about to spread west. The show is BBC America's top program, and Canada's Space network is currently presenting its third season to an impatient, already-hooked audience.

Whoever introduced tooth-bleaching gel to the U.K. should he knighted.

Captain Jack is openly, enthusiastically gay. As are you. When you were staring your career, would you have believed that television audiences would accept a gay action hero?

Honestly? Probably not. And that's not me just saying it for the sake of an answer. I don't think I would have. But, a lot of things have changed since then.... Captain lack is someone who, no matter who he kisses, is still the hero. I didn't have anyone like that to look up to when I was young. You know. Billy Crystal, in Soap, was the only one, and he was a straight guy playing a gay guy. And he wasn't like me.

And all Crystal's character owe talked about was his gayness, but Captain Jack never talks about it. His sexuality is wholly naturalized within the show's world.

Because it's not an issue. And clearly, it's not about the sexuality, it's about Captain Jack's relationship with Ianto (a Torchwood team member played by Gareth David-Lloyd), the fact that they are in love with each other. But the thing that astonishes me the most is the fact that women are the biggest fans of the Jack and Ianto relationship. they want to see more.

You'll have to watch and see. But I am naked in this series.

Here's to that. Torchwood is much grimmer than I expected. Coming out of the Dr. Who franchise, I thought it was going to be more of a kids' show.

No, no, no! When we were beginning, we were the spinoff, but we've become our own entity, because our subject matter, our material, is lot darker. It's more ... the adult version. And I don't mean, as in ruder a dirtier. Adults can watch, and if they want their children to watch, it's their choice, but this a for the adult market.

Dr. Who fans can be a bit prickly. How did they react to Torchwood?

Well, there's two types. I also am a fan of Dr. Who, and have been since I was eight years old. But there's those who are Dr. Who purists, who won't watch Torchwood. And then there's the other Dr. Who fans who've come over with us and continue to be bi-sci-fi and go between the two.

You've been waiting all day to say 'bi-sci-fi'

You know what? I just came up with that. Ha! I want you to give me that credit!

When will Captain Jack atop wearing these awful suspenders?

Those suspenders - I'm going to defend myself here - those suspenders are a fashion statement from the 1950s, when farmer boys wore belts and suspenders, because was a kind of homey look, and that's why Jack loves the look. And, from a technical point of new, the suspenders keep my pants up because need the belt to hold the gun.

Plus, they make you look taller.

Do they? No. I'm tall. The suspenders are staying.

Torchwood follows the Law0020& Order format - focus on the action, only rarely glimpse the private lives of the team. Will we see more of the character's lives in the third season?

Those kinds of decisions are not my decisions. But, in series two we found that the relationships work. If you tell the story about the people, it works more than if you tell the story about the monsters. So, you get to know the characters a lot better. In series three if you've been following Torchwood - but also, you can pick up series three, if you haven't been a fan, and you can start with us on episode one and you'll learn everything about us.

But it's not the kind of show you can drop in on. You do have to know the back story to keep up.

No, I'd have to disagree with you on that. I've watched all of series three now, and every question I've been asked about Captain Jack, or the other characters, has been answered in one-liners in the program. That's the unique thing about the writing, it's able to give you all the information you need without the long expositions.

Barrowman was one of the judges of last summer's CBC reality talent competition How Do You Solve a Problem Like Maria?

He quit his studies at DePaul University in Chicago when instructors told him he'd he better suited to opera than musical-comedy.

He might be out. But he lost the lead in Will and Grace to (heterosexual) Eric McCormack because producers said Barrowman's acting was "too straight."