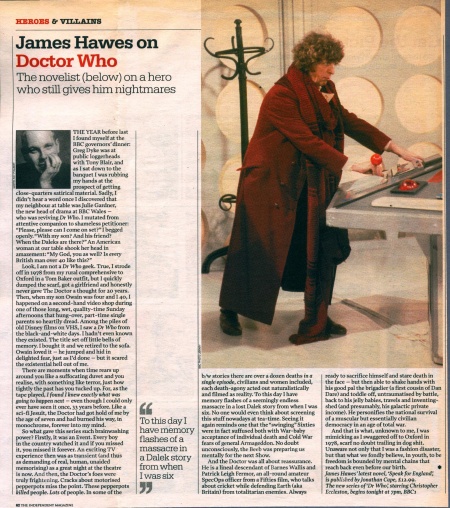 James Hawes on Doctor Who

The novelist (below) on a hero who still gives him nightmares

THE YEAR before last I found myself at the BBC governors' dinner: Greg Dyke was at public loggerheads with Tony Blair, and as I sat down to the banquet I was rubbing my hands at the prospect of getting close-quarters satirical material. Sadly, I didn't hear a word once I discovered that my neighbour at table was Julie Gardner, the new head of drama at BBC Wales —who was reviving Dr Who. I mutated from attentive companion to shameless petitioner: "Please, please can I come on set?" I begged openly. "With my son? And his friend? When the Daleks are there?" An American woman at our table shook her head in amazement: "My God, you as well? Is every British man over 4o like this?"

Look, I am not a Dr Who geek. True, I strode off in 1978 from my rural comprehensive to Oxford in a Tom Baker outfit, but I quickly dumped the scarf, got a girlfriend and honestly never gave The Doctor a thought for 20 years. Then, when my son Owain was four and I 4o, I happened on a second-hand video shop during one of those long, wet, quality-time Sunday afternoons that hung-over, part-time single parents so heartily dread. Among the piles of old Disney films on VHS, I saw a Dr Who from the black-and-white days. I hadn't even known they existed. The title set off little bells of memory. I bought it and we retired to the sofa. Owain loved it — he jumped and hid in delighted fear, just as I'd done — but it scared the existential hell out of me.

There are moments when time rears up around you like a suffocating duvet and you realise, with something like terror, just how tightly the past has you tucked up. For, as the tape played, I found I knew exactly what was going to happen next — even though I could only ever have seen it once, 33 years before. Like a sci-fi Jesuit, the Doctor had got hold of me by the age of seven and had burned his way, in monochrome, forever into my mind.

So what gave this series such brainwashing power? Firstly, it was an Event. Every boy in the country watched it and if you missed it, you missed it forever. An exciting TV experience then was as transient (and thus as demanding of real, human, unaided memorising) as a great night at the theatre is now. And then, the Doctor's foes were truly frightening. Cracks about motorised pepperpots miss the point. These pepperpots killed people. Lots of people. In some of the b/w stories there are over a dozen deaths in a single episode, civilians and women included, each death-agony acted out naturalistically and filmed as reality. To this day I have memory flashes of a seemingly endless massacre in a lost Dalek story from when I was six. No one would even think about screening this stuff nowadays at tea-time. Seeing it again reminds one that the "swinging" Sixties were in fact suffused both with War-baby acceptance of individual death and Cold War fears of general Armageddon. No doubt unconsciously, the Beeb was preparing us mentally for the next Show.

And the Doctor was all about reassurance. He is a lineal descendant of Barnes Wallis and Patrick Leigh Fermor, an all-round amateur SpecOps officer from a Fifties film, who talks about cricket while defending Earth (aka Britain) from totalitarian enemies. Always ready to sacrifice himself and stare death in the face — but then able to shake hands with his good pal the brigadier (a first cousin of Dan Dare) and toddle off, untraumatised by battle, back to his jelly babies, travels and inventing-shed (and presumably, his galactic private income). He personifies the national survival of a muscular but essentially civilian democracy in an age of total war.

And that is what, unknown to me, I was mimicking as I swaggered off to Oxford in 1978, scarf no doubt trailing in dog shit. Unaware not only that I was a fashion disaster, but that what we fondly believe, in youth, to be freedom is bounded by mental chains that reach back even before our birth.