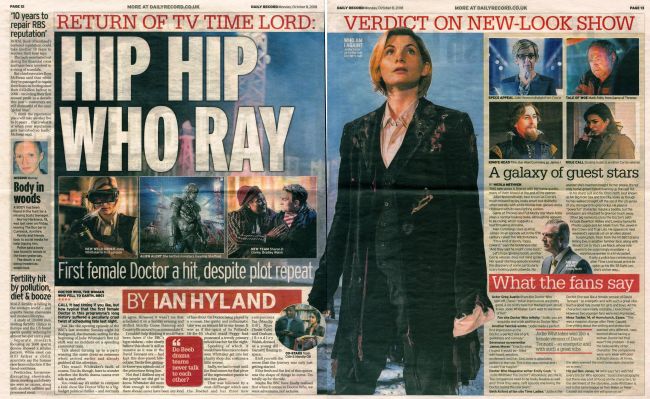 CALL it bad timing if you like, but how typical that the first female Doctor in this programme's long history suffered a peculiarly cruel twist of scheduling fate last night.

Just like the opening episode of the BBC's last monster Sunday night hit Bodyguard, the dramatic setting for the beginning of Jodie 'Whittaker's first full shift was an incident on a speeding commuter train.

Talk about turning up to a party wearing the same dress as someone who'd arrived earlier and already grabbed all the attention.

This wasn't Whittaker's fault, of course. You do, though, have to wonder whether the Beeb's drama teams ever talk to each other.

You could say it's unfair to compare a kids show like Doctor Who to a big-budget political thriller - and normally I'd agree. However, it wasn't me that scheduled it on a Sunday evening and shifted Strictly Come Dancing and Countryfile around to accommodate it.

I couldn't help thinking it would have been fairer if the BBC's hype-stokers - who clearly believe this show is still as massive as it was in the David Tennant era - had kept this slow-paced, low-octane, Tardis-free, getting-to-know-you episode out of the primetime firing line.

Not that I disliked any of the people we did get to know. Whittaker did more than enough to confirm there should never have been any kind of fuss about the Doctor being played by a woman. Her quirky and enthusiastic take was an instant hit in our house. It was as if the spirit of Su Pollard's Hi-De-Hi chalet maid Peggy had possessed a trendy primary school teacher for the night.

Speaking of which, it would have been nice to have seen Whittaker get into her charity shop chic costume a little sooner.

Sadly, we had to wait until the final scenes for that piece of the regeneration puzzle to slot into place.

That was followed by a neat cliffhanger which saw the Doctor and her three new companions Yaz (Mendip Gill), Ryan (Tosin Cole) and Graham (Bradley Walsh, dressed as a young Alf Garnett) floating in space.

It left you with the sense that the journey was only just getting started.

If the fresh and fun feel of this opener was the shape of things to come, I'm totally up for the ride.

Maybe the BBC have finally realised that when it comes to Doctor Who, we want adventures, not lectures.

A galaxy of guest stars

THIS new series is littered with big-name guests, many of them teased at the end of the opener.

Julie Hesmondhalgh, best known as Corrie's much-missed Hayley, looks smart but distinctly other-worldly with white-blonde hair, glasses and a clipboard with its own lighting system.

Game of Thrones and Full Monty star Mark Addy plays a normal-looking bloke, although he appears to be crying, which suggests a heartbreaking storyline.

Alan Cummings stars as King James I in an episode set in the l7th century called The Witch Hunters.

"I'm a kind of dandy, foppy, coward," says the Goldeneye star. "And they said he might come back."

Let's hope Shobna Gulati, another Corrie veteran, does not mind spiders. Her guest-starring episode involves the discovery of some particularly scary-looking giant cobwebs. No wonder she's reached straight for her phone. It's not only home-grown talent livening up the cast list.

In his sharp suit and tie, Chris Noth, best known as Mr Big from Sex and the City, looks as though he has walked straight off the set of the US series (if you disregard his grey locks). He plays a "powerful" character, maybe a baddie, but the producers are reluctant to give too much away.

Other big names to cross the Doctor's path include Downton Abbey and Lovejoy favourite Phyllis Logan and Art Malik from The Jewel in the Crown and True Lies. He appears in next weekend's episode set on an alien planet.

Susan Lynch, fresh from the hit BBC1 drama Killing Eve, is another familiar face, along with Would I Lie to You's Lee Mack, whose role seems to be surprisingly mundane - a warehouse worker in a hi-viz jacket. If only a police box containing an alien Time Lord would arrive to spice up his life. Sit tight Lee, she's on her way...

Who am I again? Jodie turns up in the last Doctor's suit

TALE OF WOE Mark Addy from Game of Thrones

What the fans say

Actor Greg Austin (from the Doctor Who spin-off, Class): "Initial impressions are pretty good. A lot of iffy-ness but the best part about it was Jodie Whittaker. Can't wait to see more of her

Fan site Doctor Who Infinity 'Jodie, you are exquisite and a fab addition to Doctor Who."

Another fanclub wrote: 'Jodie made a perfect first impression as the Doctor, a perfect mix of grit, quirkiness and comedy."

Severance screenwriter James Moran: "Exactly what I hoped it would be - filled with heart, emotion, excitement and fun. And Jodie is absolutely perfect in the role. This is the new normal and I couldn't be happier."

Doctor Who Magazine writer Emily Cook: "Is Jodie Whittaker the Doctor? Absolutely, yes she is. The companions need to be really likeable as well and I think they were. I left episode one loving the Doctor, loving the new team."

Beth Axford of fan site Time Ladies: 'Jodie is the Doctor. She was like a female version of David Tennant - so energetic and with such a great vibe. Such a good role model for girls and boys. All the characters were really relatable. I loved them:'

However, two younger fans were less impressed... Moss Tucker, 14, of Hornchurch, Essex: "This was a massive change after Peter Capaldi. Everything about the writing and production seemed very different. I was worried about having a woman Doctor but that wasn't the problem - it was the believability of her character. The companions were very weak with poor acting in places. At times, the alien seemed the most believable character on screen."

His pal Ben Jones, 14 (who says he's watched every Doctor Who episode): "Good cinematography but there was a lot of focus on the characters, to the detriment of the storyline. Jodie Whittaker is not in the same league as Tom Baker or Peter Capaldi but maybe she will grow on us."