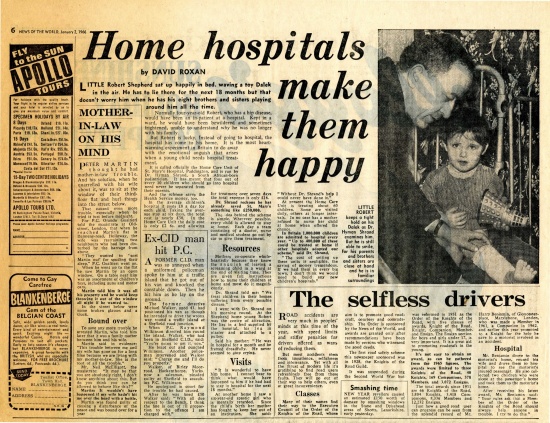 LITTLE Robert Shepherd sat up happily in bed, waving a toy Dalek in the air. He has to lie there for the next 18 months but that doesn't worry him when he has his eight brothers and sisters playing around him all the time.

Normally four-year-old Robert, who has a hip disease, would have been an in-patient at a hospital. Kept in a ward, he would have been bewildered and sometimes frightened, unable to understand why he was no longer with his family.

But Robert is lucky. Instead of going to hospital, the hospital has come to his home. It is the most heartwarming experiment in Britain to do away with the emotional anguish that arises when a young child needs hospital treatment.

It is called officially the Home Care Unit of St. Mary's Hospital, Paddington, and is run by Dr. Hyman Shrand, a South African-born pediatrician. It has meant that four out of every 10 children who should go into hospital need never be separated from their parents.

And the scheme saves the Health Service money, too.

In the average children's hospital it costs £8 a day for each child. Taking the average stay at six days, the total cost is nearly £50. In the Home Care Unit the daily cost is only £2 6s. and allowing for treatment over seven days the total expense is only £16.

The idea behind the scheme is simple. Wherever possible. every child is allowed to stay at home. Each day a team consisting of a doctor, nurse and medical student go out by car to give them treatment.

Mothers co-operate wholeheartedly because they know the anguish of leaving a screaming child in a ward at the end of visiting time. They are given full instructions how to nurse their children at home and most do it magnificently.

Dr. Shrand told me: "We treat children in their homes suffering from every possible disease,"

I went with Dr. Shrand on his morning round. At the Shepherd home young Robert was the centre of attraction. He lies in a bed supplied by the hospital, his leg in plaster and attached to a pulley.

Said his mother: "He was in hospital for a month and he fretted dreadfully. He never seemed to stop crying.

"It is wonderful to have him home. I cannot bear to think what would have happened to him if he had had to stay in hospital for the next 18 months."

At another home I saw a six-year-old spastic girl who is mentally retarded. Since the child's birth her mother has fought to keep her out of an institution. She said: "Without Dr. Shrand's help I could never have done it."

At present the Home Care Unit is treating about 60 children. Some are visited daily, others at longer intervals. In no case has a mother refused to nurse her child at home when offered the chance.

In Britain 1,000,000 children are admitted to hospital every year. "Up to 400,000 of these could be treated at home if other hospitals adopted our scheme," said Dr, Shrand.

"The cost of setting up these units is negligible, the saving of money tremendous. If we had them in every big town, I don't think we would need to build any new children's hospitals."

Caption: LITTLE ROBERT keeps a tight hold on his Dalek as Dr. Hyman Shrand examines him. But he is still able to smile, or his parents and brothers and sisters are close at hand and he is in familiar surroundings