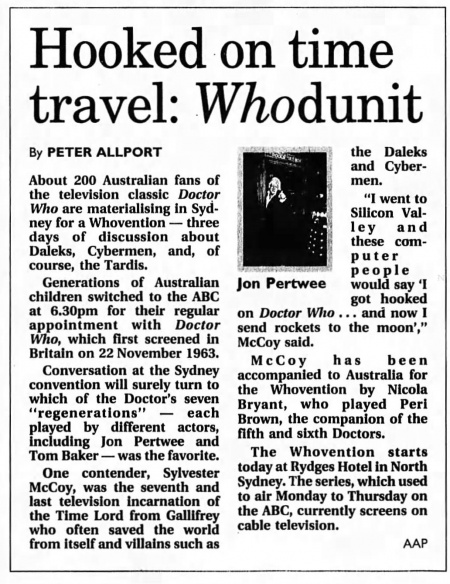 About 200 Australian fans of the television classic Doctor Who are materialising in Sydney for a Whovention - three days of discussion about Daleks, Cybermen, and, of course, the Tardis.

Generations of Australian children switched to the ABC at 6.30pm for their regular appointment with Doctor Who, which first screened in Britain on 22 November 1963.

Conversation at the Sydney convention will surely turn to which of the Doctor's seven "regenerations" - each played by different actors, including Jon Pertwee and Tom Baker - was the favorite.

One contender, Sylvester McCoy, was the seventh and last television incarnation of the Time Lord from Gallifrey who often saved the world from itself and villains such as the Daleks and Cybermen.

"I went to Silicon Valley and these computer people would say 'I got hooked on Doctor Who ... and now I send rockets to the moon'," McCoy said.

McCoy has been accompanied to Australia for the Whovention by Nicola Bryant, who played Peri Brown, the companion of the fifth and sixth Doctors.

The Whovention starts today at Rydges Hotel in North Sydney. The series, which used to air Monday to Thursday on the ABC, currently screens on cable television.