How Casanova made his next conquest a dalek 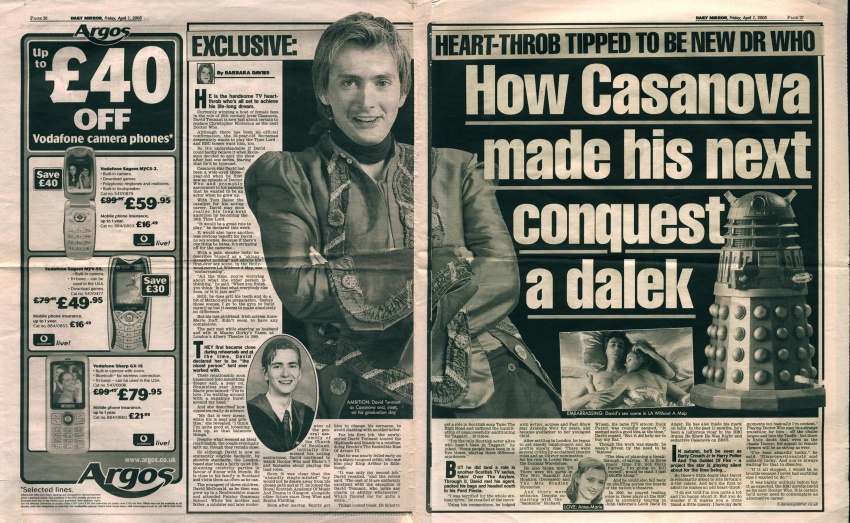 HEART-THROB TIPPED TO BE NEW DR WHO

HE is the handsome TV heartthrob who's all set to achieve his life-long dream.

Currently winning a host of female fans in the role of 18th century lover Casanova, David Tennant is now just about certain to replace Christopher Eccleston as the next Doctor Who.

Although there has been no official confirmation, the 33-year-old Scotsman desperately wants to play the Time Lord and BBC bosses want him, too.

So it's understandable if David could hardly believe it when Eccleston decided to quit the show after just one series, fearing that he'd be typecast.

Casanova star David had been a wide-eyed three-year-old when he first saw an episode of Doctor Who and promptly announced to his parents that he wanted to be an actor when he grew up.

With Tom Baker the catalyst for his acting career, David may soon realise his long-held ambition by becoming the 10th Time Lord.

"It would be a great role to play," he declared this week.

It would also have another, less obvious benefit for David no sex scenes. Because if there's one thing he hates, it's stripping off for the cameras...

With a pale, slender body, he describes himself as a "skinny streak of nothing" and admits his first-ever sex scene, in the Hollywood movie LA Without A Map, was "embarrassing".

"All the time, you're worrying about what the other person is thinking," he said. "When you finish, you think: 'Is that what everybody else does, or is it just me?"

Still, he does grit his teeth and do a bit of Method-style preparation. "Before those scenes, I go to the gym to build myself up but it seems to make absolutely no difference.-

But his last girlfriend, Irish actress Anne-Marie Duff, didn't seem to have any complaints.

The pair met while starring as husband and wife in Maxim Gorky's Vassa, at London's Albery Theatre in 1999.

THEY first became close during rehearsals and at the time, David declared her to be "the nicest person" he'd ever worked with.

Their relationship soon blossomed into something deeper and, a year on. Shameless star Anne-Marie proclaimed: "I'm in love. I'm walking around with a sunshine burst around my head."

And she described how opposites really do attract.

"My flat is very messy, while his is neat and pristine," she revealed. "I think I'm quite good at loosening him up. so that balances things."

Despite what seemed an ideal relationship, the couple eventually split up. though they remain close.

So although David is now an eminently eligible bachelor, by showbiz standards, the London-based star leads a fairly quiet life, shunning celebrity parties in favour of dinner with friends. He is close to his family in Scotland and visits them as often as he can.

The youngest of three children. David McDonald, as he then was, grew up in a Renfrewshire manse and attended Paisley Grammar School. While his mother and father, a minister and later moderator of the general assembly of the Church of Scotland, initially dismissed his acting aspirations, David continued to watch Doctor Who and Blake's 7 and fantasise about playing the lead roles.

Soon it was clear that the "absurdly single-minded" boy would not be drawn away from his chosen path and at 17, he joined the Royal Scottish Academy Of Music And Drama in Glasgow, alongside other future stars Greg Wise and Emma Fielding.

Soon after leaving, Equity got him to change his surname, to avoid clashing with another actor.

For his first job. the newly-styled David Tennant toured the Highlands and Islands in a minibus, doing Brecht's The Resistible Rise Of Arturo Ui.

But he was nearly felled early on by a sharp-tongued critic, who saw him play King Arthur in Edinburgh.

"It was only my second job." David recalled, "and the review said: 'The cast of 18 are uniformly excellent with the exception of David Tennant, who lacks any charm or ability whatsoever.' Which floored me for quite a while..."

Things looked bleak. He failed to get a role in Scottish soap Take The High Road and suffered the humiliation of unsuccessfully auditioning for Taggart... 16 times.

"I'm the only Scottish actor alive who hasn't been in Taggart,- he joked. "Some people have been in it five times. playing three different murderers."

BUT he did land a role in another Scottish TV series, Takin' Over The Asylum. Through it, David met his agent, packed his bags and headed south in his Ford Fiesta.

"I was terrified for the whole six-hour drive,- he recalled of the move. Using his connections, he lodged with writer, actress and Fast Show star Arabella Weir for years, and became godfather to her youngest child.

After settling in London, he began to get steady employment and his profile slowly rose. There were several critically-acclaimed theatre roles and an Olivier nomination for his role in Lobby Hero at the Donmar Warehouse.

He also broke into TV. There were bit parts in The Bill, Randall And Hopkirk (Deceased) and The Mrs Bradley Mysteries.

And there were setbacks. Despite costarring with the "bankable" Richard Wilson, his lame ITV sitcom Duck Patrol was roundly panned. "It seemed such a good idea at the time," David mused. "But it did help me to buy my flat."

Though the work was steady, he wasn't driven by the need to be "famous"...

"The idea of planning a breakthrough, of saying, 'If, in three years' time I'm not Colin Farrell, I'm going to kill myself , would be mad. I just shuffle along."

And he could also fall back on shuffling across the boards of the nation's theatres.

In 2000, he played leading roles in three plays at the RSC and is currently touring in John Osborne's Look Back In Anger. He has also made his mark on telly. In the past 12 months, he's been a ludicrous vicar in the BBC drama He Knew He Was Right and seductive Casanova on BBC3.

IN autumn, he'll be seen as Barty Crouch Jr in Harry Potter And The Goblet Of Fire — a project the star is staying silent about for the time being...

So there's little doubt that David is reluctantly about to join Britain's A-list celebs. And he's the first to admit he makes an odd heart-throb.

"I do get told I'm nice quite a lot and I'm happy about it. But you do wonder if it makes you a little bland, a little unsexy. I have my dark moments but basically I'm content." Playing Doctor Who may be a strange transition for him - off the chaise longue and into the Tardis - but there is little doubt that, even as the chaste Doctor, his appeal to female viewers will be as strong as ever.

"I've been absurdly lucky," he said. "Disproportionately and unfairly lucky. And you're always waiting for that to dissolve.

"If it all stopped, I would be in trouble because I never had anything else I wanted to do."

It was highly unlikely before but if, as expected, the BBC unveils David as its next Doctor Who, it is certain he'll never need to contemplate an alternative career.

AMBITION: David Tennant as Casanova and, inset, on his graduation day

EMBARRASSING: David's sex scene in LA Without A Map